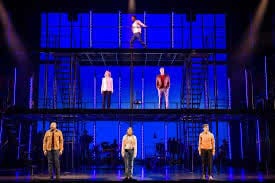 “Is that normal?” People in therapy commonly describe a particular thought, feeling or behavior in vivid detail, and then ask whether what they are describing is “normal”. Is it “normal” to scroll through photo after photo of your ex even if you broke up months ago? Is it “normal” to have so many dreams about losing your voice? Is it “normal” to keep a piece of a dead parent’s unwashed clothing so that you can smell it and try to conjure their unique scent from time to time?

Until theaters across the country went dark, the Tony award winning musical Next to Normal was enjoying rave reviews throughout its revival tour. The generous and electric performances of the six-person cast shine a light on the question of what “normal” looks like in the realm of mental health and grief. These questions feel even more relevant during the current coronavirus crisis.

But back to the play for a moment. Rachel Bay Jones won the Tony Award for her role as the angst filled mom Heidi in Dear Evan Hansen. In Next to Normal, Jones plays Heidi, the doting mother of two who seems full of life and spirit and energy until she doesn’t. The play opens with Heidi enjoying an exchange with her charismatic teenage son. But it soon becomes clear that Heidi’s energy is a deceptive and fleeting burst of mania. It also turns out that one of the two children she dotes on so lovingly has been dead for well over a decade. Her enthralling performance toys with the idea of what it really means to be or feel normal. Can doctors or mental health practitioners or even family members dictate what normal looks like in the face of loss? Can we place a yardstick up against the arch of grief and hold anyone to a clear-cut standard?

Next to Normal’s rhythmic and provocative study challenging these questions has stayed with me as I continue to work with therapy clients both virtually and in person. Each of us has a list of pressing concerns and a list of current losses. Deserted schools, virtual classrooms, canceled travel, worry for parents and grandparents, longing for life to return to “normal”. We are all wondering what “normal” will look like in our future.

The play emphasizes the power of human connection and the complex reality that humans process grief in unusual and unpredictable ways. Our collective communities will eventually acclimate and find a new “normal”. As we alter our social patterns and practice physical distancing, the ability to create intimacy through words, honesty and acts of kindness may be the best medicine.