My Name is Lucy Barton

My Name is Lucy Barton 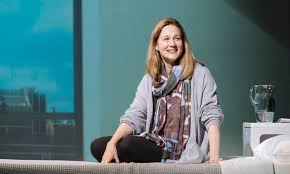 It feels like a lifetime ago (early February) that I was fortunate enough to witness Laura Linney on Broadway in the one woman rendition of Elizabeth Strout’s best-selling 2016 novel My Name is Lucy Barton. The play closely follows the poetic novel’s plot, tracing Lucy’s unexplained hospitalization and prolonged, life-threatening illness.

Lucy’s husband needs to work and take care of their kids, so he convinces Lucy’s mother (who has never taken a plane) to fly to Manhattan to keep Lucy company in the hospital. Linney was stunning as Lucy, and entertaining when she morphed into her mother in this memorable one-woman show. Linney is not playing two different characters. Instead, she is playing one character that, at times, becomes an animated imitation of the other.

During the show, I felt fortunate to see one of my favorite actresses become a literary character she seemed meant to play. I wondered how she could remember so many lines and what tricks she might be using to not loose her voice performing each evening, night after night. I also recall that the sounds of audience members coughing throughout the Samuel J. Freidman theater seemed much more noticeable. Was that because we were all thinking more about the mysterious virus exploding in China? Might a sound that was always present in shows of the past sound amplified as questions about the virus penetrated my consciousness? Or were audience members actually sick? I felt relieved to have a seat in the back row of the theater. I remember feeling pleased that the doctor had a revered presence in the play, though not quite as much of a beloved presence as in the book.

What I did not anticipate at the time was how incredibly fortunate Linney was to complete her Broadway run while so many other actors and staff were not so fortunate. Nor did I contemplate that the very idea on which the plot is based — being permitted to be in a hospital with an ailing loved one — could soon seem like a luxury. Nor could I have imagined that I would look back the beloved doctor’s presence in the play and feel even more awe and appreciation for who doctors are and what they do. In the play, Lucy’s doctor is a respected and revered illusive presence lurking devotedly in the background, pulling Lucy through her illness and keeping her alive. That’s who doctors are and the play acknowledges the significance of this role. With so much to grieve and fear during this uncertain time, I feel grateful that doctors and other medical and scientific professionals are being seen for the heroes they are and always have been.