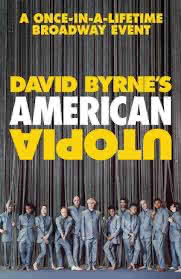 David Byrne began his uplifting performance in American Utopia by musing with his audience about the human brain and its capacity for change. Of course, this is a concept explored by therapists and human behavior experts. The brain’s capacity for psychological change is also a central focus for clients in therapy.

What unfolded on stage at the Hudson Theater was a melodious joyfest performed by the former Talking Heads band leader and his barefoot, grey suit cladded collaborators. Byrne reflects on and demonstrates his personal evolution from an intimidating indie icon to an exuberant father figure and advocate. One takeaway from the show is that we can, indeed, evolve to become happier and more fulfilled. Another message is that music possesses the capacity to act as a mind-shifting gateway toward transformation. Rolling Stone described the show as “art rock group therapy.” I must admit I found the experience so profoundly joyous that I wished there were a way for the experience to be shared with a larger audience.

My wish came true this weekend when David Byrne and his exuberant chorus line from American Utopia joined as guests on Saturday Night Live. The skits were extra hilarious. Vanity Fair proposed that the sketch mocking La Guardia Airport be the funniest of this season. The show was a therapeutic distraction from the stresses related to the speaking Corona Virus and the over-populated democratic presidential primaries. And David Byrne and his colleagues exploded on stage with two numbers from the show. Vanity Fair’s Karen Valby took the words out of my mouth when she wrote:

A person doesn’t realize how much she needs David Byrne in her life until he’s standing there alongside a dozen other musicians, all of them in dove grey suits and bare feet, singing “Once in a Lifetime.” The performance felt so fully alive and contemporary and intelligent and silly, and each musician got a bit of shine. Byrne was benevolent king of cool. I had tears in my eyes.

I wish I could see the show again, and bring everyone I love to join me. Given the unrealistic nature of this desire, encouraging others to watch the leap year 2020 SNL episode in full feels like an appealing plan B.