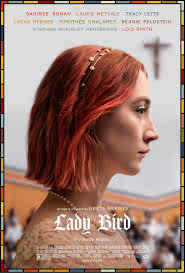 Written and Directed by Greta Gerwig

I doubt I can overstate my excitement when my sixteen year-old daughter mentioned she was eager to see the film Lady Bird with me. She was even willing to sit next to me in a theater, and open to spending a bit of time together before the show. (She typically prefers streaming movies solo on her laptop or making rare theater outings with her friends.) I tried to be, as she would say, “chill,” but I was pleased to spend time with her; these days, the things I say, the questions I ask, the way I dress, the speed at which I walk, and even the way I stand get on her nerves.

I knew little of the content of the film heading in. I expected a story about an independent young heroine finding her way. I was not prepared for a film about intense estrangement between a working mother (whose field is mental health) and her unconventional teenage daughter. Though her parents named her Christine, the daughter insists on going by Lady Bird. Her re-naming of herself is a perfect metaphor for the coming-of-age trajectory as Lady Bird finds her way.

Lady Bird’s father has lost his job, and her exhausted mother is working double shifts at the psychiatric hospital. Lady Bird’s brother and his partner share a job at the grocery checkout counter despite their college degrees from Berkeley. Meanwhile, Lady Bird does not exactly fit in at her Catholic school: She is spunky, with shades of pink in her hair, and she’s a bit of a trouble-maker, so her parents fear she will lose her scholarship. Lady Bird is desperate to get out of Sacramento and to attend a liberal arts college in New York City, but her mother is certain she lacks the credentials, smarts, motivation or connections to get in. Her mother insists that a state school is the only option, and all they can afford.

The tension between Lady Bird and her mother cocoon the narrative and shape the story, capturing beautiful bursts of angst, energy and creativity that make teenagers such magnificent and mysterious beings. Equally well-captured are the challenges of parenting; I felt surprised by how many comments Lady Bird’s mother made that felt relatable, however, unattractive. The film’s characters — even the Catholic school teachers – come across as real and flawed and lovable. When a romantic disappointment is followed by a new crush, and one boy’s name is crossed out in crayon above Lady Bird’s bed and replaced with another, middle-aged viewers are granted rare access into the mindset that parents long to re-capture in hopes of understanding and connecting with their teenage children.

I intentionally do not work with teenagers in my therapy practice. Adolescent years are so precarious and complicated, and I believe that only clinicians who specialize in working with this age group are positioned to be effective. I do work with many parents of teens, however, and I often suggest film viewing as a precursor to discussions. The emotional distance between any film’s plot and our own lives make many difficult topics more accessible and less awkward.

For example, after the film, I learned from my daughter that I don’t annoy her as much as Lady Bird’s mom annoys Lady Bird. I learned that even if I am a walking embarrassment, she feels respected and loved. Our mother-daughter trip to Lady Bird was an ideal way to conclude 2017 and I recommend that any mothers of teenage daughters who are willing, should try to see this film together and discuss it afterwards.