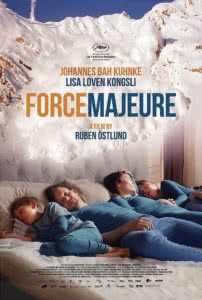 Family vacations represent an important opportunity to reconnect, recharge and step away from the constant demands of daily life. Families look forward to family vacations and invest in them both financially and emotionally. Family vacations hold the promise of unfolding as some of the happiest memories for parents and children alike. But sometimes these holidays do not live up to their promise. Perhaps this explains why Hollywood makes so many films about family vacations.

The 2014 Swedish film Force Majeure, directed by Ruben Ostlund, breaks the mold of family holiday films. Winner of multiple awards, including the Jury Prize in Un Certain Regard, the film follows a seemingly perfect Swedish family of four on a ski holiday at a glamorous resort in the Alps.

The film opens atop a breathtaking mountain with expansive views. Ebba, Thomas, and their beautiful children, Vera and Harry, have paused for a professional photograph. They look confused and self-conscious while aggressively directed by the resort photographer who asks them to move closer to one another in order to generate idyllic images for the camera. Helmets awkwardly bump together and cheeks flush with cold and embarrassment. The tension between style and substance becomes an immediate theme. Any couple who have ever taken young children on a ski vacation will laugh out loud as Ebba and Thomas struggle to balance dropped mittens and tired, hungry children.

On their second day, the family skis through the morning, then dines together on a balcony enjoying lunch and yet another magnificent view. Ebba has mentioned a few times that she wishes Thomas would stop checking his phone. As they eat outside, they hear loud explosions nearby from avalanche control detonations, and then watch, mesmerized, as a wall of snow barrels down the adjacent mountain side. Awe turns to terror, however, as the snow continues to build unexpectedly and heads straight at the restaurant, then all goes white as snow envelopes the balcony. Ebba runs toward her children to cover and protect them just before the snow hits, but Thomas – shockingly – instinctively picks up his cell phone and runs the other direction, away from his family. In an instance it is over, and it turns out that only a powdery fog hit the restaurant, not a deadly wall of snow. The scene at the restaurant rapidly returns to normal as dazed skiers shake off the snow and realize they are unhurt.

The bulk of the film then explores the marital tension that unfolds when Ebba and Thomas have different memories of the experience. The damage is psychological and shakes the couple to their emotional core.

The French phrase force majeure is a legal term appearing in contracts as a provision that allows a party to terminate their contractual obligations when circumstances beyond their control arise that render their ability to meet their obligations inadvisable or impossible. This symbolic reference parallels the couples’ struggle to re-calibrate and absorb the experience of the almost-avalanche.

This captivating tale opens a window into the inner emotional experience of two married people struggling to become more intimate. Understated acting and convincing dialogue invite viewers on a memorable marital journey. While it might be difficult for Ebba and Thomas to describe their holiday as fun, it is certainly becomes both meaningful and memorable.