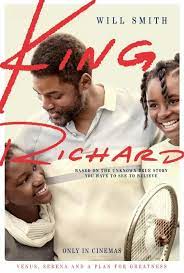 As the film King Richard opens and viewers meet the Williams family, there are a lot of healthy relational dynamics to admire. Richard and Oracine Williams are fiercely devoted to their 5 daughters and work tirelessly to build an enriching childhood and a safe secure home. The daughters work hard, do chores, have manners and embrace each other with laughter and love. As the characters develop and Venus and Serena’s legendary tennis careers careen forward, the complexity of these relationships are the anchor of the film. King Richard, streaming on HBO and in theaters, is a riveting and inspiring story based on the true events of how Venus and Serena became the greatest women tennis players and possibly the greatest athletes of all time.

Both Venus and Serena are producers of the film which serves as an ode to their childhood that conveys deep respect for the role their parents played in shaping their dual paths to greatness.

The Williams home is humble, busy, loud and organized. Expectations are high, not just for tennis but for school, manners, and attitude. Both parents work hard and model resilience. When gang members harass them during local practice and later beat Richard to his knees, the family remains undeterred and even more determined to find a coach at an exclusive tennis club so that the girls can play safely.

Once this goal is achieved and persistence lands Venus an opportunity to work with legendary coach Paul Cohen and later Rick Macci, the family discovers that the parents on the elite tennis circuit are as dangerous as the gang members. Richard is adamant that Venus exit the junior circuit despite the frustration of the coaches. He insists that the game remain fun and that Venus’s inner confidence be protected. As a black family in a white sport, he consistently intuits what is best for his daughters despite the aggressive advice from experienced coaches and brands who keep insisting that they know better.

When Venus and her sisters act cocky in the privacy of their family van after a big win, Richard forces the family to watch the fairy tale Cinderella to emphasize the importance of remaining humble.

Late in the film, as the cracks in Richard and Oracine’s marriage widen, viewers may wonder if the tennis stardom keeps the couple together or tears them apart. The answer is not explored but the complexity of the strengths and challenges in the marriage enhance the story. Richard never fails to annoy and frustrate the tennis pros, his wife, his neighbors and his daughters. But the film is a clear tribute to his vision, commitment, grit and prescience.