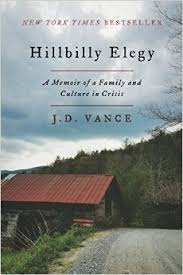 What factors facilitate authentic change? And what traits of character and various factors allow some people to overcome adversity while others become paralyzed? The urge to create a change is always a part of therapy. If therapy is successful, clients should be able to identify a substantive change by the time they conclude.

Hillbilly Elegy: A Memoir of a Family and Culture in Crisis by J. D. Vance traces the author’s unexpected trajectory from poverty to Yale Law School. Vance’s series of childhood homes are broken, patched up, broken again, bandaged back together only to become shattered yet again. Instead of buckling in the face of hardship, Vance shows fortitude and undergoes a transformation.

Vance introduces himself as a quintessential hillbilly: “Americans call them hillbillies, rednecks, or white trash. I call them neighbors, friends and family.” Through each upheaval, Vance remains a likeable and steadfast character whose bond with his unconventional, crude, loving grandmother “Mamaw” represents his emotional anchor and internal salvation. Mamaw’s colorful cultural compass animates this page-turning read:

“Jacksonians say hello to everyone, willingly skip their favorite pastimes to dig a stranger’s car out of the snow, and – without exception – stop their cars, get out, and stand at attention every time a funeral motorcade drives past. It was the latter practice that made me aware of something special about Jackson and its people. Why, I’d ask my grandma – whom we all called Mamaw- did everyone stop for the passing hearse? ‘Because, honey, we’re hill people. And we respect our dead.’”

Hillbilly Elegy has received endless praise and spent many months on several bestsellers lists. Vance’s ability to tap into the cultural zeitgeist that influenced the 2016 Presidential election is an obvious factor catapulting his book to must-read status. Equally striking is Vance’s intuitive understanding and ability to write about how a psychological parent does not need to be the actual parent. A supportive, loving presence in a child’s life can make up for what may be lacking elsewhere and can provide the necessary parenting that facilitates an authentic change. Mamaw is clearly Vance’s primary psychological parent, even during the many years when he does not live with her. He routinely dashes over to her home as a respite from his mother’s drug addiction and volatile love life. His most significant transformation takes place during the years when he convinces his mother to allow him to move in with Mamaw. While financially disadvantaged and utterly uneducated, Mamaw is always willing to spend money on Vance’s educational necessities:

“If Mamaw could drop $180 on a graphing calculator – she insisted that I spend none of my own money – then I had better take schoolwork more seriously. I owed it to her, and she reminded me of it constantly. “Have you finished your work for that Selby teacher?” “No Mamaw, not yet.” “You damn well better start. I didn’t spend every penny I had on a little computer so that you could fuck around all day.” Those three years with Mamaw – uninterrupted and alone – saved me. I didn’t notice the causality of the change, how living with her turned my life around.”

Mamaw’s essential influence is enhanced when Vance enlists in the Marines. He loses a lot of weight, develops discipline, and builds a modicum of financial stability. His self-esteem flourishes during his service, and he is able to parlay his grandmother’s love, his innate intelligence, and his military experience to become a remarkable student.

Change is not a simple process, nor is it always a straightforward trajectory. Many therapy clients long for an epiphany, and once in a while this wish is fulfilled. Even Vance senses a modest epiphany during his deployment. During an Iraqi mission a small boy approaches him and holds out his open hand. Vance gives him a small eraser. The boys face ignites with delight and Vance acknowledges a shift, despite his disbelief in epiphanies:

“That moment, with that boy, was pretty close for me. For my entire life, I’d harbored resentment at the world. I was mad at my mother and father, mad that I rode the bus to school while other kids caught rides with friends, mad that my clothes didn’t come from Abercrombie, mad that my grandfather died, mad that we lived in a small house. That resentment didn’t vanish in an instant, but as I stood and surveyed the mass of children of a war-torn nation, their school without running water and that overjoyed boy, I began to appreciate how lucky I was: born in the greatest country on earth, every modern convenience at my fingertips, supported by two loving hillbillies.”

Vance’s engaging and insightful observations as he documents his transformation is inspiring, enlightening and humbling.