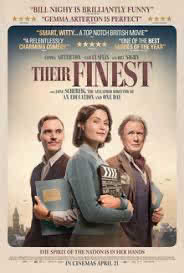 The mysteries of attraction and the selection of romantic partners are frequent focal points of discussion during individual therapy. If you have a pattern of choosing unsuitable or unavailable romantic partners, it is important to figure out why you are making substandard choices, especially if you want to experience more fulfilling relationships. It is also important to practice spending time with more suitable suitors. Changing your choice in suitors can sometimes feel awkward or even uncomfortable. However, with time, practice and persistence, relationship patterns and choices can change. And more satisfying and fulfilling relationships are possible. Exploring this rich process of dating, romance and love is often an important dimension of psychotherapy.

Lone Scherfig’s new film, Their Finest, is set in England in 1940 and reminds us that the complex laws of attraction are timeless and borderless. The war is on and the draft has drained the traditionally male workforce. The Brits want to produce a film that will help rally Americans on behalf of their cause, but with a dwindling pool of workers, the film industry has lost actors, producers and screenwriters alike. Women are joining the workforce and the movie industry is no exception. Catrin Cole (Gemma Arterton), is recruited by the British government to help write the script. Arterton is utterly convincing as the film’s reluctant and relatable heroine asked to use her feminine perspective to create a story that will convince American women that their husbands should join the British forces. The laws of attraction are challenged when unlikely chemistry between screenwriters sets the stage for classic and satisfying storytelling.

Bombings are ubiquitous, death feels omnipresent, and so the necessity to live life to the fullest is an inspiring theme. As the production team collaborates and rehearses, the message is clear – life is not a dress rehearsal. Their Finest has it all – an ode to meaningful work, a call to feminist ideals, a tale of bravery and fortitude in the face of adversity. Most of all, Their Finest is a classic and compelling love story that reminds viewers of the power of the medium of film and also of the power of love.