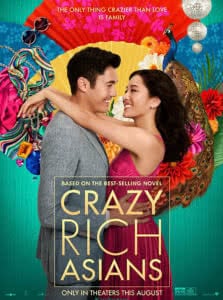 Rachel Chu, a game theory economics professor and first generation Chinese American, is an easy heroine to admire. When Crazy Rich Asians opens, Rachel is rocking her lecture that wraps up with a slick conclusion as her boyfriend, Nick, picks her up for dinner. At the chic restaurant, Rachel and Nick lean toward each other at the bar and seem to enjoy a typical modern relationship. They playfully joke about Nick’s habit of preferring to pick at Rachel’s dessert rather than enjoy his own. Viewers might analyze this opening scene to represent Rachel’s appeal as a woman who enjoys dessert and Nick’s possible conflict about luxuries and waste. Celebrating Rachel as an atypical female who embraces dessert and analyzing Nick as possibly conflicted about spending foreshadows important themes of the film.

It turns out that the loving couple has been happily dating for over a year, but Nick has not shared with Rachel that he is an heir to one of the wealthiest families in Singapore. Nor has he shared that his family has been urging him to leave New York and return to run the family’s real estate empire. Rachel discovers Nick’s extraordinary wealth when they arrive at the airport to travel to Singapore for Nick’s best friend’s wedding and they are ushered into first class. Rachel tells the agent she is mistaken, and Nick interrupts and asks Rachel to “just go with it.”

What then unfolds is a cross between a modern day Cinderella and a modern day Romeo and Juliet. Nick’s family and inner circle reject Rachel, who is hurt both by their rejection but also by Nick’s secretiveness and failure to prepare her for the complex dynamics and drama she enters immediately upon arrival. While Rachel does her best to adhere to layers of etiquette and traditions, what makes her character so psychologically appealing is how grounded she remains through every twist and turn of the plot. She does not care about Nick’s money and she is not impressed by material stuff. She does not crave a rags to riches narrative, and she insists on being respected for who she is.

The conflict between Nick and his over-bearing but loving mother makes psychological sense. The plot effectively explores the tensions that play out among many couples whose parents (and children) have difficulty letting go. This film rightfully implies that engagements and weddings are about separation and emotional maturity. In order for the relationship between Rachel and Nick to survive, they need to become each other’s emotional number one. As Nick’s regal, complicated grandmother weighs into the mix, inter-generational patterns play out in the form of emotional family legacies that are difficult to break.

This surprisingly rich (pun intended!) love story is inspirational and emotionally meaningful. Crazy Rich Asians is worthwhile viewing for any couple considering engagement or struggling to navigate parental boundaries that simultaneously respect their families and their union.