A Place for Us

A Place for Us 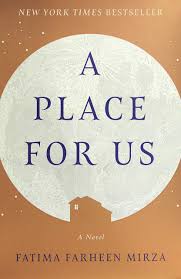 When a relative cuts off from a family, the absence presents a conscious and unconscious heavy heartedness that is difficult to resolve. Interestingly, when a therapy client reveals that a relationship with a family member has been severed to the point that there is absolutely no communication, there are often many other cutoffs discovered throughout their family tree. One theory is that such cutoffs represent a pattern of emotional rigidity and inflexibility that becomes ingrained in the family culture. Cutoffs often transpire when one or more members of a family lack exposure or awareness to a template or model for how to express and address their feelings and concerns. Substance abuse is also a common thread woven into the family fabric of many severed family relationships.

Fatima Farheen Mirza’s mesmerizing novel A Place For Us begins its story when a young first generation American named Amar, who has cut off from his family, returns to his hometown to attend his oldest sister Hadia’s traditional Indian wedding. The tale unfolds in a series of flashbacks describing the trajectory of Amar’s parents’ immigration and arranged marriage. Their family life sets a simple stage to demonstrate how organically siblings fall into family roles which then become cemented over time. Hadia is the determined and studious perfect oldest child. Huda fades into her sister’s shadow and generally does what she is told, possibly thriving through an organic tendency to receive limited parental attention. Amar, meanwhile, cannot be popped into any mold. He is rebellious and questioning by nature, creative, and constantly clashes with his father Rafiq’s high expectations and limited emotional bandwidth. Amar is not academic. He will not put away his things. He wants to speak English at home and resists the use of Urdu.

The tension for the survival of tradition in the face of assimilation is an important focus of the book, and the plot explores the dynamic relationship between family roles and cultural expectations:

“Speak in Urdu, Ami” [his mother] reminds him. Ever since Hadia first learned English at school it has been difficult to make any of them speak in Urdu. They speak in English so quickly that they sound like little trains zooming by. They act as though it were the superior language, the more stylish one. She has to make it a game at dinner to encourage them. It confuses her. Urdu is the language she and Rafiq speak with one another and all they every spoke with the children, but one goes to school and the others pick it up like wildfire, as if they’ve forgotten their own tongue entirely. It worries her: if they so easily lose their own language, what else will be lost?

The absorbing final chapters of the novel are the most compelling, as the plot line shifts to Rafiq’s perspective and explores Amir’s cutoff from a father’s perspective. Readers can finally experience the patriarch’s character from a different angle that texturizes the story and digs deeper into the tragic consequences that trail a cut off family relationship. Some relationships are so dangerous and dysfunctional that they must be severed. But in most instances, discovering a way to relate and communicate and engage is a far healthier strategy that allows for a sense of closure and a freeing of powerful emotional energy.