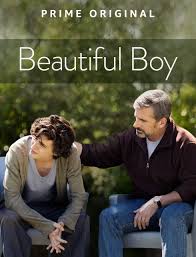 The film Beautiful Boy concludes with the statement in the closing credits that drug overdose is now the leading cause of death in Americans under age 50. Hardly a spoiler, this stressful statistic is the backdrop of the central question of film – why are so many young people getting hooked on drugs and dying of drug overdoses? The plot tells the true story of one father’s quest to understand his son’s addiction to methamphetamines and his excruciating journey hoping to help his son toward sustained recovery.

Steve Carell convincingly plays David, a thoughtful writer who is cool enough to smoke a joint with his son Nic. (Maybe he is too cool?) David is obviously bonded with Nic and they seem to have carved out a delightful, artistic existence in the Marin County, California. Timothee Chalemet plays Nic, David’s creative, lovable son who applied to seven colleges and is accepted to them all. Nic seems well adjusted to his parent’s divorce and genuinely happily connected to his stepmother and his two half-siblings. It’s Nic’s idea to smoke the joint to celebrate his college acceptances. David is clueless to the secret that the joint is merely a light appetizer warming Nic up to an extensive smorgasbord of other drugs.

The screenplay is adapted from two different books – one written by David Scheff, the other written by his son Nic — and it toggles between the past and the present. Belgian Director and screenwriter Felix Van Groeningen also made the exquisite film about loss and addiction The Broken Circle Breakdown that was nominated for an Academy Award for Best Foreign Language Film in 2014.

David learns the basic principles and tag lines of substance abuse treatment. “Relapse is a part of recovery.” “Call your sponsor.” Through each relapse episode and subsequent rehab stint, David continues his determined mission to discover why this addiction is so tough to beat. He reads brain studies. He takes other addicts out to lunch. He even tries the drug himself! He listens with a weeping furrowed brow as Nic explains that his first meth high delivered an experience of euphoria so strong that it filled an underlying void. But we never quite learn is what the void is about. This feels a bit frustrating and leaves viewers imagining that the void relates to Nic’s parent’s divorce. Several flashbacks focus on Nic’s trips from one parent to the other. In one flashback, a sullen young Nic boards a flight back to his mother in Los Angeles, and David assures him that he loves him more than everything. The phrase “everything” becomes an ongoing spoken reference code to their connection. Nic’s mother acknowledges that there was a phase of the addiction that she couldn’t handle. But still, we do not gain much clarity about the void.

Perhaps this unanswered question is intentional and implies the possibility that methamphetamine addiction has no “why”. Perhaps the “why” is as random as making one bad choice on one teenage night out blowing off steam. Or, the “why” might involve choosing a friend who turns out to be an addict who convinces others, in a moment of weakness, to give it a try. Regardless of the answer to this difficult question, the film is worth viewing with teenagers to discuss the perils of addiction and the gravity of this current American epidemic.