The Way Way Back

The Way Way Back 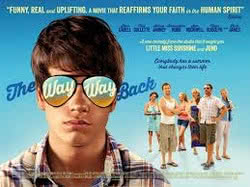 Nat Faxon and Jim Rash’s heartwarming, psychologically astute film The Way Way Back has all of the elements of a perfect end-of-summer film.  The luring beach, the breezy boat rides, the classic water park, the welcoming summer cottage and the festive outdoor dinners remind us what we will miss about summer. The film’s enticing aesthetic threatens to make it all the more challenging to return to our fall routines.

Then again, Steve Carell’s superb portrayal of Trent, the lame and annoying boyfriend of fourteen year-old protagonist Duncan’s mother, reminds us why sometimes even the best vacations need to end sooner rather than later.

This wonderful coming-of-age story follows Duncan’s efforts to take space from the sub-standard Trent and to come to terms with his parents’ divorce and the pain of his father’s absence and rejection.  The film opens with Duncan huddling in the way, way back of the car, while Trent informs him that, on a scale of one to ten, he is a three.  Duncan’s profound awkwardnesses and teenage angst is painful to watch and thoroughly believable.  He barely knows how to swim much less talk to a girl.  Through a hilarious and surprising friendship with Owen, the manager of the Water Wizz water park, Duncan finds his voice, discovers some memorable dance moves, and makes his way.

The most important and somewhat unusual message of this powerful story is that sometimes children receive parenting and critical emotional support from unexpected parent figures who are able to give what biological parents have been unable or unavailable to provide.  The ability to connect with surrogate, stand-in parent figures can be transformative or even life saving.  It is a survival skill that is surpisingly common among children of divorce.  Few films have explored this dynamic as well as The Way Way Back; however, Good Will Hunting comes to mind as a completely different story with a similar theme.  Whether adjusting to a trauma as difficult as a parents’ divorce (Duncan’s), or as emotionally paralyzing as foster care and physical abuse (Will Hunting’s), connecting with someone who is not a friend and not a parent, but somewhere in-between makes a lasting impact that is beautifully and creatively explored in both of these wonderful films.