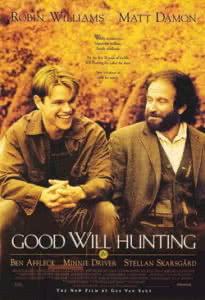 Many people enter therapy because they are struggling to make a decision about commitment.  Sometimes, deciding to commit to a romantic partner can produce tremendous anxiety, especially for those who have not been exposed to healthy, intimate relationships.

Directed by Gus Van Sant, Good Will Hunting is an intense and inspiring coming-of-age film about friendship, loyalty, and living up to one’s potential.  It is also a remarkable exploration of intimacy and fear of commitment.  Matt Damon and Ben Affleck became over-night celebrities as the writers and co-stars of this film for which they shared the Academy Award for Best Original Screenplay.

Will Hunting (Matt Damon) is a product of the foster care system living on the South Side of Boston and working as a janitor at MIT.  He begins solving complex equations on the blackboard that have rendered the elite university students stumped.  It turns out that Will Hunting possesses the kind of mathematical genius that comes along once in a lifetime.  After assaulting a police officer, Will represents himself in court and avoids jail time by agreeing (reluctantly) to meet regularly with a therapist.  To say that Will resists his work with therapist Sean McGuire (Robin Williams) is something of an understatement.  The therapy is somewhat unconventional, and the breakthrough moment is an over-simplification of the therapeutic process; however, the therapy serves as a remarkable backdrop for an exploration of intimacy, fear of commitment, and the human struggle to live up to one’s potential.

What is unusual about this film is its ability to explore intimacy and commitment in a way that feels honest and real.  By doing so, Good Will Hunting demonstrates that sometimes the most important aspects of parenting may not take place with a biological parent.  The human ability to connect on an intimate level with friends, mentors and teachers may fill gaps that parents have been unavailable or otherwise unable to provide.  Sometimes people who were not properly protected or nurtured by their biological parents figure out ways to meet these unmet needs through developing formative relationships with parent figures so that they do not get stuck in unhealthy patterns and instead develop the ability to experience intimacy and live up to their potential.

If you are struggling with the question of whether to take an intimate relationship to the next level, viewing Good Will Hunting could be a worthwhile step in your decision making process.