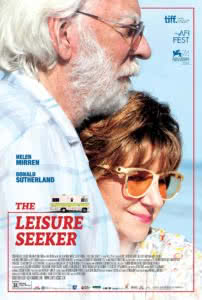 Research demonstrates that engaged and newly married couples that watch films together about marriage and discuss the films afterwards are able to lower the likelihood of divorce to an extent that is as effective as participating in short-term couples therapy.

Most films about marriage focus on the entertaining romantic tension that builds until a couple finally gets together. Or they focus on the painful process of navigating the relationship’s demise.

When a film breaks from Hollywood convention and explores the inner workings of marital intimacy, couples have a therapeutic chance to see glimmers of themselves reflected on the screen, and they can begin to address areas of their own relationship with a degree of emotional distance. This distance often creates less defensiveness and greater willingness to acknowledge where there is work to do in order to grow emotionally and enhance intimacy.

The Leisure Seeker, starring Helen Mirren and Donald Sutherland, shines a bright light on the complex dynamics of marital intimacy. Ella (Mirren) and John (Sutherland) are a married couple staring down their mortality on their own terms. The film begins as viewers learn — along with the couple’s shocked and worried adult children – that Ella and John have made a sudden decision to take a cross-country trip in their Winnebago to head to Key West to visit Hemingway’s house. They leave town without word, and the plans are not discovered until their children realize that the 1975 vehicle, long ago nicknamed “The Leisure Seeker”, is no longer gathering dust in their garage. Their children try frantically to track them down. Their father is not fit to drive, they worry, and their parents do not seem competent to make this trip.

As Ella and John head across the country, John’s mental deficiencies and Helen’s physical deterioration are clear. The trip is punctuated by the challenges of navigating old age, and a desire to heal long-standing marital wounds. A shotgun is wielded. An unexpected motorcycle ride, a confusing scene in the middle of a Trump rally and a hilarious confrontation in a nursing home animate the trip. Mirren and Sutherland disappear into their roles and the cracks and crevices that make up a married life are excavated with humor, pain, beauty and affection. The quiet moments and conversation between them feels believable, raw, and fused with love. Aging is difficult and not always dignified. Mortality is terrifying. Ella and John’s determined journey does not shy away from this loss of dignity and fear of death. Marrying couples vow to be together until death parts them, and this brave story celebrates life’s final chapter and offers meaningful lessons along the way.