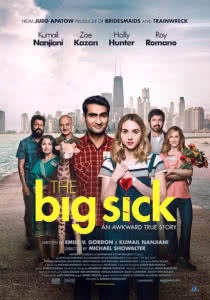 Breakups can be heartbreaking, traumatic and disorienting. Therapists are intimately familiar with breakups, because a relationship’s demise is often the catalyst for therapy. A surprising outcome of certain breakups is that sometimes, they ultimately save the relationship.

Director Michael Showalter’s hilariously raw romantic comedy, The Big Sick, illustrates a compelling roadmap to the ways in which a breakup might salvage a relationship. In a brutally honest collaboration, the husband and wife duo Emily V. Gordon and Kumail Nanjiani wrote the film’s script which tells the true story of the couples’ romance, breakup and eventual reconnection.

In the film, Kumail Nanjiani (of Silicon Valley and Portlandia fame) plays his younger self – a struggling standup comic in Chicago with big dreams and strong bonds to his Pakistani Muslim family. Each weekend, Kumail heads to his parents’ home and, during each weekend meal, a new potential bride shows up, unannounced. Kumail’s parents are not shy about their desire to arrange his marriage. The one-dimensional aspect of these Pakistani Muslim brides-to-be is a surprising flaw in an otherwise highly believable tale. Perhaps any potential match seems one-dimensional if one’s heart is elsewhere, but these characters could have been more developed.

Kumail meets Emily (Zoe Kazan) after one of his shows. Their chemistry is instant, palpable, and hilarious. Kumail is self-effacing, Emily is sassy and no frills. Emily wants to head home after their first hook up. She insists on calling an Uber, and the duo roll with it when her request triggers an alert on Kumail’s phone indicating that he will be her driver (just as soon as he gets dressed!) Later, a particular bedroom scene during which Emily must leave Kumail’s house in the middle of the night to find a slice of privacy, is another of the many laugh-out-loud examples of this film’s ability to capture and celebrate believable intimacy. The couples’ connection radiates a purity and simplicity that makes the film as serious as it is funny.

Unfortunately, Kumail does not feel ready to be as real with his parents as he is with Emily. He fails to acknowledge to his parents that he is falling in love with a non-Muslin, non-Pakistani woman. Telling them means facing that he is breaking with multiple traditions and cultural expectations. Being honest about his feelings risks alienating is beloved parents as well as his extended family.

Emily discovers a box of photos of beautiful Pakistani women (obviously sent by Kumail’s mother) and tearfully confronts Kumail. Kumail confesses that he does not know if he can imagine a future with Emily.

From a psychological perspective, committing to a romantic partner means making that person your emotional number one. This involves a degree of emotional separation from one’s parents that can only transpire once an individual is ready. In this particular love story, Emily is ready, and Kumail is not. So their breakup becomes a necessary and effective catalyst for emotional growth and development.

Shockingly, Emily develops an infection, and her friends reach out to let Kumail know that she is hospitalized. Once he arrives in the emergency room, Emily’s illness has progressed in severity, and Kumail is instructed by the medical staff to reach out to inform Emily’s parents. The always remarkable and endearing Holly Hunter arrives on the scene as Emily’s mom. Partnered with an equally spot-on performance by Ray Romano as Emily’s dad, the film becomes even more raw and intimate through their introduction to the story. They are close with Emily, and know the backstory behind the breakup; they are not pleased with Kumail’s treatment of their daughter, and they do not hesitate to express their displeasure.

Kumail does not cave to Emily’s parents’ request that he leave the hospital to let hem handle Emily’s illness. Instead, he sticks it out and the dynamic between the three of them enhances the over-arching love story. It seems surprising and not entirely believable that Emily’s parents would spend evenings in Emily’s apartment with Kumail rather than taking turns at Emily’s bedside. Nevertheless, the dynamic dialogue and honest acting create a generally realistic roadmap illustrating how and why a breakup is sometimes necessary in order to help prepare both halves of a couple for a serious commitment.