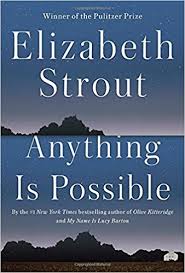 Elizabeth Stroud’s 2017 follow-up to “My Name is Lucy Barton” stands alone as an engaging, page-turning tale about how two people can have vastly different experiences of the same relationship. A group of character studies follows the same characters that played roles in “My Name is Lucy Barton”. This time around, their stories are excavated with more depth and told from the perspective of each character. They are no longer trapped in Lucy Barton’s narrative as figures influencing Lucy’s life. They are barreling down their respective paths, colliding and connecting and reflecting.

A common thread is a collective awareness that scrawny little Lucy Barton made it out of small-town Amgash, Illinois to become a famous writer in New York City. Who would have thought that this unlikely underdog from a destitute family of misfits would amount to such prominence?!?

Stroud writes with her signature honest sparseness, rounding out the complexities of Amagash’s cast of characters through simple moments and heartfelt observations:

“Once he had been in a department store with his son and daughter-in-law; Janet needed a sweatshirt. Charlie had just been following along, not interested one way or another. But his son was interested, and when Charlie glanced over, suddenly paying attention, he saw his son talking thoughtfully and earnestly to his wife – Janet was a plain and pleasant woman – and it was the glimpse of this, the engagement of his son in this small domestic exchange, that almost brought Charlie to his knees. What a son! What a man he was, this grown boy who would stand so decently and discuss with his wife exactly what sweatshirt she desired in a store that smelled like a circus tent of cheap candy and peanuts and who knows what. His son caught his eye, his face opened. ‘Hey Dad, how you doing there” Ready to go?’ The word arrived: Clean. His son was clean.”

“Alone in the room with silence he understood the previous hiatus which returned to him, that spaciousness of calm: Long ago he’d assigned a private name to it. The hit-thumb theory. On his grandfather’s room as a child one summer, hammering tiles down hard, he’d discovered that if you hammered your thumb by mistake, there was a split second when you thought: Hey, this isn’t so bad, considering how hard I was hit…And then – after that moment of false, bewildered, and grateful relief – came the crash and crush of the real pain. In the war this had happened so often, in so many forms…”

Stroud writes with psychological sophistication about infidelity, loneliness, love and loss. She understands that childhood wounds create unexpected and unpredictable scars. Her poignant characters have jumped off of the pages of Lucy Barton’s first introduction to tell an equally memorable story all their own.