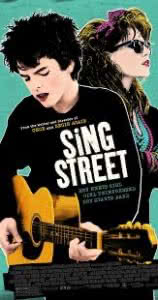 Sublimation is a freudian concept defined as the conversion of an unacceptable impulse or desire into an acceptable and even desirable form of expression. Unacceptable impulses are expected reactions to painful and traumatic experiences and are often discussed during the process of therapy.

Director John Carney’s 2016 musical coming-of-age film Sing Street celebrates how song-writing and musical expression are beautiful and inspiring ways to sublimate difficult thoughts, feelings and impulses, and transform them into something meaningful and magical.

When we first meet Conor, a moderately geeky teenager in Dublin, he is listening to his parents screaming at each other in the next room. Conor strums on his guitar, repeats his parents’ angry words to each other, and shakes his head. Conor’s dad (Aidan Gillen aka Littlefinger on Game of Thrones) has been out of work for months, and his parents soon inform Conor that he needs to leave his current school and transfer to a school on Synge Street.

The year is 1985 and Duran Duran, Smith and Depeche Mode fans will enjoy the eighties aesthetic as much as the tunes. Conor meets a Raphina (whose eyes are as captivating as Molly Ringwald’s lips) and tries to win her over by inviting her to model for his band’s music video. This invitation intrigues Raphina. But there’s a glitch — Conor is not in a band and knows nothing about shooting a video. Undeterred, Conor proceeds to bring together a motley crew of lovable misfits and gets to work sublimating his complicated feelings into lyrics that his buddy puts to music. The songwriting duo look like teen versions of Paul McCarthy and John Lennon dressed in eighties garb, and their collaboration is as inspiring as it is heartwarming.

Conor’s parents’ marriage continues to crumble, mum has an affair and moves out, and Conor’s brother offers tough love and advice that he easily doles out to others but seems unable to take himself. Despite the stress of his father’s unemployment and his parents’ separation, Conor continues to write songs, shoot videos and build a creative life. Some of the language in his songs would be improper or offensive if spoken, but becomes catchy and meaningful once set to a song. Conor’s impulse to lie to Raphina is equally unacceptable, until he sublimates his urge to lie by transforming his impulsive lie into a magical reality.

Sing Street celebrates youth, love, music and creativity. Above all, it celebrates a willingness to take risks and approach obstacles as opportunities for growth. When a dubious school called Synge Street inspires a misfit band called Sing Street, adversity transforms to create something beautiful.