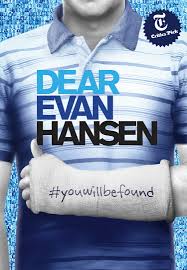 Parents of teenagers are bound to struggle to communicate and connect with their kids. It’s hard enough to lure a teen out of their bedroom, let alone to convince them to engage in an authentic conversation. One strategy to connect with teens is to create scenarios that set the stage for conversation. Driving to and from school and other activities, for example, turns out to be a time when teens are more likely to talk. Shared experiences can also stimulate conversation. Films and plays about teenagers are ideal, especially if the plot is meaningful, relatable and remotely believable.

Dear Evan Hansen is so quintessentially perfect that it is worth the trip to Broadway’s Music Box Theater to share this live experience with your teenagers. The plot may sound contrived – but it is based on a true event from writer and composer Benj Pasek’s Philadelphia high school. (The young writer and composer duo of Benj Pasek and Justin Paul also composed the score for La La Land!) The characters are believable, the conflicts are relatable and the resolution is therapeutic. Parents and teenagers have a wonderful opportunity to connect through a shared audience experience.

Evan Hansen (Ben Platt aka Benji from Pitch Perfect) is a nervous, isolated outcast who writes himself a cheesy self-affirmation letter just as his therapist has instructed. Unfortunately, Evan’s rebellious classmate, Connor, intercepts the note at the printer. Connor mocks Evan and refuses to return the note. Connor then suicides and when his grieving parents find the note in Connor’s pocket, they think it is a letter written by their son TO Evan. They mistakenly analyze Evan’s forced praise of himself to be their dead son’s appreciative praise for his one and only true friend.

Connor’s parents are desperate to piece together the mystery of Connor’s suicide, and Evan’s letter represents a treasured piece of the unsolved puzzle. They welcome Evan into their home and their lives, which conveniently connects Evan with Zoe, Connor’s sister, who happens to be the object of Evan’s romantic infatuation. Evan discovers a sense of belonging in Connor and Zoe’s family that fills the void, as he digs himself deeper and deeper into an alternative version of the past that becomes exacerbated when his deceptive efforts to help go viral. Thanks to the internet, Evan’s falsehoods mislead both Connor’s grieving family AND the millions of followers moved by a story based in lies.

As Evan contemplates the deep and deceptive hole he digs for himself, parents can expect to feel humbled in the face of how vulnerable teenagers are to suffering in isolation. Meanwhile, teenagers will relate to the believable, brutal but hopeful portrait of adolescent struggles and strengths.

My mother likes to joke that a good mom always has a few spare tissues handy. For this play a full box could come in handy.