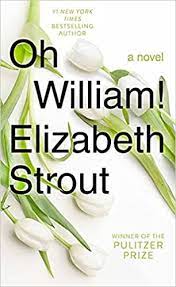 Lucy Barton, a relatable and compelling underdog admired by readers everywhere, is back for a third round in Elizabeth Strout’s magnificent continuation of a journey that began in a small New York City hospital room. Fans fell in love with Lucy reading the novel showcasing her name. My Name is Lucy Barton (2016) and the engrossing follow up Anything is Possible (2017) trace Lucy’s story and those in her orbit, as they navigate illness, betrayal, abuse and love. Some of us (myself included!) were fortunate enough to see a Laura Linney embody Lucy with abandon in the critically revered Broadway show based on the book (2019).

Oh William! (2021) picks up several years later as Lucy grieves the death of her adoring second husband. Despite widowhood, it feels satisfying to learn that Lucy finally knew intimate and fulfilling romantic love. And unsurprising that Lucy’s first husband and the father of her children, William, is on his third marriage which comes to an abrupt conclusion when his much younger wife suddenly moves out along with their teenage daughter. Lucy and William’s two daughters are both grown and married, and Lucy’s literary career has continued to blossom. While William is grappling with marital abandonment and the faltering of his career, he makes the shocking discovery that he has an older half-sister living in Maine. This nod to his mother’s mysterious past pushes William to seek solace in his amicable friendship with Lucy.

Lucy and William’s dual journey through their own grief brings them together, and they decide to travel to Maine to learn more about William’s mother’s past. Oh William! carries a plethora of insightful jewels along the way. The plot looks backwards contemplating the backstory about William’s half-sister and other unexplored chapters in Lucy and William’s earlier life together. Family secrets and betrayals are contemplated, and Lucy reflects on the devastating memories of uncovering William’s infidelity years earlier:

A tulip stem inside me snapped. This is what I felt. It has stayed snapped, it never grew back. I began to write more truthfully after that.

Despite terrific professional success, the traumatic nature of Lucy’s childhood continues to define and drive her. Stroud understands this tension and continues to cultivate the inner emotional life of her protagonist, still trying to grow and understand and learn from her mistakes.

About authority: When I taught writing – which I did for many years – I talked about authority. I told the students that what was most important was the authority they went to the page with. And when I saw a photograph of Wilhelm Gerhardt in the library I thought: Oh, there is authority. I understood immediately why Catherine had fallen in love with him. It was not just his looks, it was the WAY he looked, as though he would do what he was told, but no one would ever have his soul…And – slowly – I realized this: This authority was why I had fallen in love with William. We crave authority. We do. No matter what anyone says, we crave that sense of authority. Of believing that in the presence of this person, we are safe.

Oh William! continues a memorable journey that will leave readers longing for more. I can’t wait to reconnect with Lucy when she is in her Eighties!