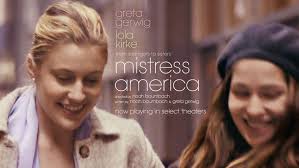 The development of a solid sense of one’s self is often the goal of psychotherapy.  When therapy clients in their late teens, twenties or thirties seek therapy describing debilitating anxiety, depression or general dissatisfaction with their lives, these symptoms can often resolve when the client embraces the daunting task of figuring out who they are and how to exist as a separate, independent self.

Mistress America, co-written by indie royalty couple Greta Gerwig and Noah Baumbach (and directed by Baumbach just four months following the release of While We’re Young!) pays tribute to this complex psychological task.  Granted, the therapist figure in the film is not a traditional psychotherapist but a fortune teller guided by “the spirit”, but this psychic’s urging that Brooke look back and resolve “unfinished business” — and his eventual urging that the protagonist, Tracy, learn to exist inside her body rather than “five feet to the left of it” — are clinically consistent with central tenets of psychotherapy.

Tracy (Lola Kirke) is a freshman studying literature at Barnard College.  (Co-writer and co-star Gerwig also attended Barnard.)  Tracy is desperately struggling to find her place academically, socially and emotionally.  Her mother is about to re-marry, and has informed Tracy that she’ll get to meet her step-sister-to-be and other new family members when they gather for Thanksgiving.  When Tracy confides to her mother that college life feels like being at a party where you’re totally out of place and know no one and you can’t leave because the party is happening everywhere, all of the time, Tracy’s mother encourages her to reach out to her soon-to-be step sister, Brooke (Gerwig).  Trapped in a haze of boredom and isolation, Tracy reluctantly reaches out to Brooke, and an intense flame of infatuation begins to burn. Brooke is a glamorous, under-educated, urban hipster who lives in Times Square and dabbles in middle school SAT prep, soul-cycle instruction and interior decorating of laser hair removal salons.  Brooke inspires Tracy to experience New York as she always imagined it would be.

Brooke’s companionship unlocks Tracy, who is now able to write with candor and abandon using Brooke as her muse!  Tracy writes a short story titled “Mistress America.”  The duo embark on parallel journeys toward what systems-based therapists (such as myself) would call differentiation.  Differentiation refers to the process of maturing emotionally so that one can be with another, but still experience one’s self as a truly separate self.  Undifferentiated individuals tend to be driven by powerful unresolved unconscious conflicts and therefore do not have a clear sense of who they are.  Instead, they tend to either cling to others in order to define themselves through that other person OR they tend to dramatically push others away in order to define themselves in terms of opposition to others in their lives.

Mistress America is a perfect coming-of-age celebration of this concept of differentiation.  (Other schools of therapy might call it “separation” or “self-actualization”.)  Tracy is so lacking in a sense of herself that she must steal small objects from those she admires in order to try to capture some part of them for herself.  What unfolds — via an unconventional sisterhood journey toward emotional growth — is an engaging modern-day road trip among an unexpected cast of characters.  The unexpected road trip and its subsequent series of self-discoveries is reminiscent of Greg Mottola’s classic independent cinematic ode to New York, Daytrippers.  Bizarre concepts such as intricately homemade apple-bongs and restaurants where locals flock for haircuts get thrown into a glorious mix of provocative dialogue and an engaging characters.  This gem of a film will stay with viewers, especially those who can identify with how hard it can feel to figure out who you are.