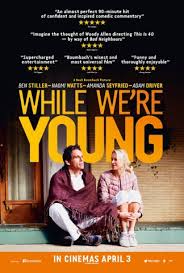 “If age is just a state of mind, then While We’re Young is the best kind of therapy a forty something starting to lose touch with the younger generation could hope for.”   Peter Debruge, Variety

Josh (Ben Stiller) and Cornelia (Naomi Watts) are settling into their forties and beginning to feel all washed up.  Josh, a documentary filmmaker, can’t seem to finish a film he has been editing for a decade, and Cornelia is struggling to adjust to the altered landscape of her friendships now that the last of their formerly childless friends has had a baby.  Following a miscarriage and failed infertility treatments years ago, the happily married couple put the kid thing on hold to focus on their careers and enjoy their freedom.  They proclaim to love the ability to leave town spontaneously, though they have not done so in years.

Following what looks and sounds like a rather dry and defensive academic lecture, Jamie (Adam Driver) and Darby (Amanda Seyfried) approach Josh to express admiration for his obscure cinematic work.  A mutual infatuation is born.

Cornelia joins Josh and the twenty-something Jamie and Darby for dinner and the two couples proceed to become inseparable.  Jamie is an aspiring film-maker and Josh glows in the light of his admiration.  Darby is an ice cream maker and her flavors are exotic and delicious.  Josh praises the young couple over coffee with their age appropriate friends: “I like how engaged they are in everything… it’s infectious.”  Cornelia agrees: “It’s like their apartment is full of everything we threw out but it looks so good the way they have it.”  Josh mentors Jamie and advocates the importance of “truth”.  Jamie inspires Josh to become more fashion forward and embrace creativity.   Josh starts wearing fedoras and considers building his own desk from scratch.  Darby brings Cornelia to hip-hop class and Cornelia rocks it.  Double dates involve walking on deserted train tracks, and attending spiritual ceremonies while dosing hallucinogenic drugs.  When they are having trouble thinking of the name of a particular almond flavored confection, Josh reaches for his phone to Google the answer and stops mid-finger tap — the group is charmed by Jamie’s novel suggestion to forgo Googling and choose to “not know it.”  The next day, Cornelia relishes discovering the coveted answer the old fashioned way, when she suddenly remembers it’s Marzipan!

While We’re Young plays deftly with questions about fidelity, intimacy, professional fulfillment, success, technology and truth.  Without offering answers, the dialogue is as provocative as it is hilarious.  On a psychological level, one take on the film is that Josh and Cornelia have reached a common mid-life rut that often leads one half of the couple to embark on an affair.  Instead, the two have a dual affair through their parallel infatuations with younger incarnations of themselves.  Much like the trajectory of many extramarital unions, the high of the infatuation masks important truths, and a rude awakening ensues.

Research indicates that targeting film viewing followed by structured discussion can mirror the benefits of therapy.  While We’re Young is worthwhile viewing for anyone struggling with mid-life anxiety.  Likewise, for couples who may have lost their spark, this film demonstrates that re-lighting the flame is possible and that it is never too late to learn, evolve and grow.