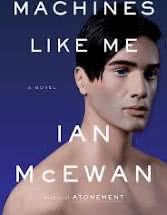 The impact of technology on relationships is a recurring theme in therapy. Our collective addiction to screens is a constant distraction and barrier to intimacy. Couples routinely fight about how much time their significant other spends looking at a phone or checking social media or excessively streaming. But technology also brings people together, whether through viewing a favorite show side by side, keeping in touch via Facetime during business travel or texting flirtatious messages. The paradox of how technology connects and disconnects is not likely to resolve anytime soon.

Ian McEwan explores this tension in Machines Like Me

, a novel set in a hypothetical version of London in the 1980s. Many historical facts are different in McEwan’s compelling and believable alternative universe. Jimmy Carter wins a second term, John Lennon is never assassinated, and the Beatles stage a reunion tour. Most relevant to the plot, legendary mathematician Alan Turing survives the shaming that ensued when his sexuality was discovered and manages to avoid the urge to suicide. Instead, he channels his genius into developing artificial intelligence at an astonishing pace, bringing the first synthetic humans to market in the 1980s. This groundbreaking set of artificial humans is built by Turing but designed by their eventual owners. They are all named either Adam or Eve.

A lost soul named Charlie receives an inheritance and decides to splurge on an Adam. He then convinces his love interest and neighbor, Miranda, to help him design Adam’s personality. So Adam inherits some of his traits through Miranda, some through Charlie, and a virtual child is born. Adam shocks Miranda and Charlie with his skills and intelligence as he simultaneously brings the couple together and tears them apart in expected and unexpected ways.

McEwan is a beautiful writer who masters small moments and big questions. When Miranda finally introduces Charlie to her father and Adam joins for the visit, Miranda’s father confuses the two and assumes that Charlie is the robot during a hilarious and memorable luncheon. When Charlie has the opportunity to meet his idol, Turing, their conversation slices into the heart of the dilemma of artificial intelligence. Turing offers an explanation to address Charlie’s growing concerns about Adam’s behavior:

“We may be confronting a boundary condition, a limitation we’ve imposed upon ourselves. We create a machine with intelligence and self-awareness and push it out into our imperfect world. Devised among generally rational lines, well disposed to others, such a mind soon finds itself in a hurricane of contradictions… Millions dying of diseases we know how to cure. Millions living in poverty when there’s enough to go around. We degrade the biosphere when we know it’s our only home…And all the rest – genocide, torture, rape, and scores of daily outrages. We live alongside this torment and aren’t amazed when we still find happiness, even, love. Artificial minds are not so well defended.”

McEwan challenges the reader to ponder what makes us human and what it means to love. His memorable novel flies far out of the box to shine a bright light on our relationship to technology and our relationships with each other.