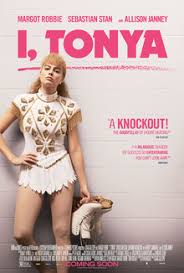 The previews and early promotion of I, Tonya inspired memories about Tonya Harding and her scandalous role in the 1994 attack on Nancy Kerrigan. I felt conflicted about revisiting that infamous incident and the popular cultural drama that followed. I assumed that I would enjoy learning more about the competitive world of figure skating, but felt unsure whether I wanted to learn more about the film’s villainous centerpiece.

I was surprised at how seamlessly the film leads viewers to re-think assumptions about Tonya Harding. What unfolds is an unexpected and thoughtful exploration of the cycle of domestic abuse and a simultaneous conversation about current cultural clashes that are so relevant today.

In my vague memory, Nancy Kerrigan was the superior athlete, Tonya Harding was a spiteful villain, and Oksana Bauil completely out-skated them both in the Lillehammer winter Olympic games. Craig Gillepie (director) and Seven Rogers (writer) achieve an impressive repackaging of a specific moment in American popular culture. They explore Harding’s perspective as a gifted athlete whose father abandons her, whose mother abuses her, and who faces a system that seems rigged to prioritize poise and privilege. Harding rises up in the cut-throat skating culture despite her hand-sewn costumes and limited ice time.

While Kerrigan and her posse are orbited by indulgent parents and enjoy financial security, Harding works minimum wage and subsists on generic ice cream sandwiches. (Klondike Bars are too expensive.) The film invites viewers to marvel at Harding’s grit and determination and presents her trajectory in a sympathetic context that celebrates her strengths as a skater and as an emotional underdog.

There are many schools of psychology and one of the most interesting elements shared by all is an acknowledgment of the human tendency to repeat the past. Cognitive theory explores learned thoughts. Behavioral theory emphasizes learned behaviors. Systems theory explains that if a dynamic is familiar, it will feel consciously and unconsciously comfortable even if it is unhealthy. Freudian theory describes a “repetition compulsion” through which a drive exists to repeat the most painful parts of the past. An unconscious fantasy is attached to this drive that imagines that by repeating the past, painful dynamics will be mastered and old wounds will be healed.

All of these psychological theories are meaningful in attempting to understand the cycle of domestic abuse vividly contextualized through Harding’s story. Why are abused children so vulnerable to grow up to abuse others or to choose abusive partners? Is the collective psychological system as rigged as our cultural barriers to success?

I, Tonya is – at its core – a film about the cycle of domestic abuse and the complex emotional barriers and adversity survivors face along the road to recovery.