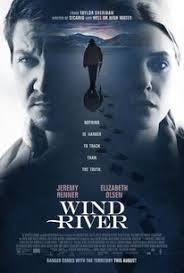 If either of my teenage daughters suggest to watch a movie with me, I eagerly agree. (A bit too eagerly, they would say.) My sixteen year old and I missed Taylor Sheridan’s Wind River in theaters, and we both enjoy a good murder mystery, especially if a strong female detective is featured. As a therapist prone to over-analyzing in my personal and professional life, I am drawn to movies with strong and believable female characters when I have a chance to watch with my daughters.

Because murders on Native American land are federal crimes, the FBI dispatches Banner, who is woefully ill-equipped to navigate the terrain (she arrives, in the depth of winter, in a windbreaker). Banner makes up for her youth and naiveté through grit, bravery and determination. Her seriousness as a strong and believable character is compounded by the lack of romance between Banner and Lambert despite the intense circumstances of the terrain and the close proximity these characters enjoy throughout the investigation.

Wind River was therapeutic mother-daughter viewing for unexpected reasons beyond Olsen’s substantial role. I, like many of my therapy clients, struggle with my teenage daughters’ desire to feel trusted and with how this reasonable urge often leads to insistence on a degree of independence that can feel extreme or even reckless. “Don’t you trust me?!?” is a question I and so many of my therapy clients with teenage children are often asked. Without spoiling the gripping backstory that the murder investigation reveals, this film offers metaphorical lessons about trust, supervision and independence.

The entirely unexpected twists and turns of this gripping plot — set in the breathtaking backdrop of the Wyoming landscape – demonstrate how a grown-up situation that seems appealing and wonderful can quickly change and devolve into a dangerous and life-threatening chaos. If your teenagers are pressing for more autonomy than you feel they can handle, this compelling and memorable film has an important message.