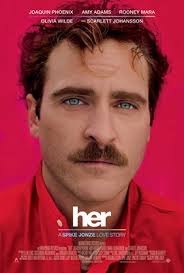 As a therapist working with adults in their twenties, thirties and forties, many of whom are single, I frequently discuss the way that technology affects dating and relationships with my clients.  I often wonder what the future will look like, and how much farther the internet revolution will infiltrate and impact the human experience of intimacy.

Spike Jonze’s critically acclaimed film, Her, won the Academy Award for best screenplay and was selected as the best film of 2013 by the National Board of Review Awards.   Released on DVD in May, Her had five Academy Award nominations and Spike Jonze also won the Best regional Screenplay Award from the Writers’ Guild of America.  Set in Los Angeles in an aesthetically captivating 2025, this provocative film attempts to answer this question:  what does the next decade have in store in terms of the internet revolution?  It is tough to remember dating, or even communicating for that matter, before email, let alone smart phones, FaceBook and texting.   With all that has changed, how much further can technology go in its attempt to bridge connections?  And how much deeper can technology infiltrate our lives, therefore intensifying the ironic side effect of forging disconnection along the way?

The film opens with protagonist, Theodore Twombly (Joaquin Pheonix), grieving the separation and divorce of his wife of many years.  His bizarre profession — employed by a web site to learn about the lives of the site’s users in order to write hand-written personal notes that are then scanned and emailed to their recipients — functions as a metaphor implying that computers have taken us full circle.  Where they once perfected and simplified route tasks, they now require human elements to fuel their unstoppable trajectory toward personhood.  To this end, a new operating system is available that asks a few personal questions (not dissimilar from an on-line dating profile) in order to create a personal operating system that simulates a human being.    As Theodore falls madly in love with his operating system “Samantha” (Scarlett Johansson), he pulls back from his personal relationships and finally lets go of his ex, Catherine (Rooney Mara).  This unconventional futuristic love story is set in the captivating context of computers that talk to you, high-waisted pants, pastel-tinted large plate windows, and contrasting window treatments that perfectly complement the impression that the future may simultaneously connect and  isolate us past the point of no return.

At its psychological core, Her is about loneliness, aloneness, and the human quest to be able to be with another, and yet still experience one’s self as a truly separate self.  The ability to feel stable, secure and even happy on one’s own is a goal I explore often with therapy clients.  After all, if you can be happy on your own, then any relationship you choose is bringing the other into a much healthier, more positive space.  If computers are always there to quell the sensation of aloneness, able to anticipate our most human wishes and desires, how can the separate sense of self form in a healthy way?   If you are suffering from the pain of a divorce or difficult breakup, and struggling with the sensation of loneliness, this film offers a strong message about the experience of aloneness and the power of the human connection.