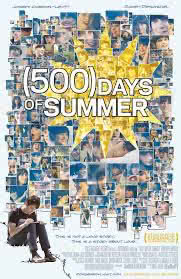 A painful breakup is one of the most common reasons people seek therapy.  Breakups are almost never easy, and almost never mutual.  Most people going through a breakup say they wish they could reverse their situation back into a relationship.  However, as much as losing a relationship can hurt, breakups also carry the opportunity for important emotional growth.

Director Mark Webb’s 2009 quirky film, 500 Days of Summer, is a romantic comedy that tells the tale of Tom (Joseph Gordon-Levitt), a frustrated architect working as a greeting card writer, who is madly infatuated with his seductive, uber-cool colleague, Summer (Zooey Deschanel).   Tom falls hard for Summer, Tom pursues Summer, Tom briefly dates Summer, Summer dumps Tom, and Tom falls apart.  One of the firsts lines of the film is “This is not a love story.”  The opening credits read:

“AUTHOR’S NOTE: the following is a work of fiction.  Any resemblance to persons living or dead is purely coincidental….. Especially you Jenny Beckman.”

The next screen refers to Jenny Beckman with an offensive expletive.   Alternating cleverly between days 500, 1 and everywhere in between, this banter-filled, witty breakup film conveys some important psychological truths that apply to many breakups.

It is tough to find true love while your professional life is floundering;
Tom has an architecture degree, and a passion for cityscapes.  But he seems paralyzed with respect to pursuing his professional dream.  Tom’s professional frustration is a compelling undercurrent of the film and a probable obstacle in his relationship with Summer.

There is a huge difference between infatuation and intimacy. Like a drug, infatuation does not last.  It can cause an altered and less appealing version of one’s self that can, ironically, function as an obstacle to intimacy;
Tom is so into Summer his friends can barely stand to be around him, and his interactions with Summer seem obsessed with his fantasy of their union.  For example, Summer is clear from day one that she does not want a serious relationship, and Tom does not seem capable of believing her; this seems to drive a wedge between them.

A disappointing  breakup can be a catalyst for necessary change;
Tom grows the most  most during his breakup.  During his love affair, Tom is happy-go-lucky, but his family and friends have trouble connecting with him.

After a breakup, it is easy to romanticize the good and overlook the bad;
Especially for those who spent most of the relationship in an overly infatuated state, relationship amnesia is a risk.  To this end, Tom’s younger sister offers wisdom beyond her years while sitting on the sideline of her soccer game:

“Hey Tom, I know you think that she was the one, but I don’t.  I think you’re just remembering the good stuff.  Next time you look back, I think you should look again.”

Breakups often involve the destruction of a fantasy; while true intimacy is grounded in reality;
Some of the best lines of the film are spoken by Tom’s best friend, Mathew, when he describes his girlfriend of many years:

Tom’s line of work seems to date the film, though it is only five years old.  Viewers may find themselves wondering, “Do greeting card companies still have a full team of writers?  Why don’t they ever discuss their on-line presence during business meetings?”  However, Tom’s particular line of work is an interesting to contrast to the heartbroken on-line greeting card writer/ protagonist played by Joaquin Pheonix in Spike Jones’ Academy Award winning 2013 film Her.   500 Days of Summer’s plot is also quite similar to Don Jon, written, directed and starring 500 Days of Summer lead Joseph Gordon-Levitt.  Both films follow the story of a cool guy falling hard for a beautiful gal who breaks his heart.  Both films feature significant, prescient romantic advice dispensed by the protagonist’s super mature younger sister.  And both films emphasize the message that sometimes true intimacy occurs only once there is less fantasy and more reality.  It seems quite likely that both Spike Jones and Gordon-Levitt drew inspiration for their 2013 films through this memorable 2009 movie about intimacy.

If you are struggling with a painful breakup, set aside 95 minutes to watch this thoughtful and humorous film.  Even if you have already seen it, it will feel more powerful to watch while you , yourself, are going through it.

Share on FacebookShare on TwitterShare on Linkedin
Posted in Breakup, Dating, Films