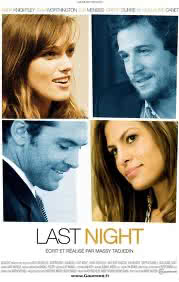 As a therapist, one truth I witness again and again is that infidelity is much more common, and much more complicated, than it seems.  Affairs that take place on an emotional level are often more difficult to recover from than those involving a physical attraction leading to sex.  Few films explore the difference between these dynamics in such a sophisticated way as Massy Tadjedin’s 2010 film “Last Night”.

Another lesser-discussed truth about affairs is that many couples fight about the third party early on, before any marital transgression has occurred.  “Last Night” insightfully portrays how one partner can pick up on an attraction and experience a powerful reaction even if no one has technically cheated.  Many times couples enter therapy following an affair, and they will recall fights that were focused on the third party months before things went astray.

Joanna (Keira Knightley) and Michael (Sam Worthington) are a young, glamorous, married couple living in New York City.  From the moment that Joanna lays eyes on Michael’s sensual colleague, Laura (Eva Mendes), she senses the palpable chemistry between them.  Her radar in this early scene and the discussion that follows is intensely similar to my clients’ frequent descriptions.  While the compressed timing of events that play out over the two-day period in which the film takes place is somewhat unrealistic, the dynamics and dialogue between Joanna and Michael, are compelling, painful and very real.

The most significant truth that more than fifteen years working with couples has taught me is that if both partners are fully committed to making their marriage work following the discovery of infidelity, they can come through it closer than they were before, and with a happier, more intimate, more committed marriage.  One of the many awful things about an affair is that it is not something that people can ever forget.  However, especially if the spouse who cheated is willing to do whatever it takes to rebuild trust, couples can and do get through it.

For couples that discover infidelity and remain wholly committed to making the marriage work, “Last Night” may be a helpful film to watch together and discuss.  Indeed, many couples I have worked with have found this film helpful.  Joanna and Michael clearly love each other deeply and dispel the myth that something must be deeply, desperately flawed in a marriage if someone cheats.  When asked by his provocative colleague, Laura, if he is happily married, Michael replies:

“Yes, very; you can be happy and still be tempted.”

Interestingly, not one but both partners experience temptation while apart from one another.  How Joanna and Michael deal with their respective extra-marital love interests is the focal point of the movie and can serve as a catalyst for productive conversations.

The most powerful aspect of this film is its understanding of context.  When two people are involved in an extra-marital affair, it becomes easy to confuse fantasy with reality.  In other words, what usually brings two people together in an affair is not necessarily sustainable in real life.  Joanna says it perfectly to her ex, Alex (Guillaume Canet), who happens to be visiting from out of town on the very evening that Michael is on a business trip with Laura:

“I don’t know that this would be what it is on its own… This is only what it is because it’s something that’s between me, my marriage…you and your set of things.”

If you and your spouse are struggling with the discovery of infidelity, and you both are committed to saving your marriage, find a qualified couples therapist and consider sitting down together to view this powerful and engaging film.