Everything I Never Told You

Everything I Never Told You 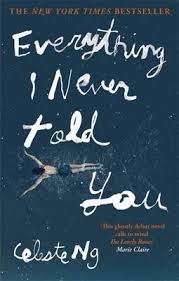 Celeste Ng’s 2014 debut novel about a Chinese-American family coping with the excruciating aftermath of a teenager’s death is as absorbing as it is humbling. It is absorbing due to its complex and realistic characters, each with their own layers and secrets and struggles related to the middle daughter, Lydia’s, mysterious disappearance and death. And it is humbling, for any parent who imagines that they know all there is to know about their teenage children. Marilyn, James, Nath, Lydia and Hannah Lee comprise an Amerasian family in a nameless Ohio town in the 1970s, and Ng captures the bold and subtle layers of racism that penetrate and define each family member’s experience. On an emotional level, the plot underscores an essential principle of psychology — the human tendency to repeat the past:

There are many schools of psychology, and the acknowledgment of a universal drive to repeat the past is a thread that ties them together. Behavioral theory explores learned behaviors. Cognitive theory emphasizes learned thoughts that inform subsequent feelings and behavior. Systems theory states, quite simply that, if something is familiar, it will feel comfortable, even if it is not optimal. And psychoanalytic theory proposes the concept of a repetition compulsion — that consciously or unconsciously we are driven to repeat the most painful dimensions of our past with an unrealistic fantasy attached to this drive that we will master difficult dynamics and therefore heal past wounds. The plot gracefully floats back and forth through time to demonstrate the conscious and unconscious choices the characters make as they struggle to overcome their past. Lydia’s father, James, for example, was tormented and traumatized by his childhood of extreme poverty as a first generation child of immigrants who sacrificed everything for his education. Ng writes with an understanding of unconscious drives as she explores James’ love for his wife Marilyn.

Hers had been just one of the pale, pretty faces, indistinguishable from the next, and though he would never fully realize it, this was the first reason he came to love her: because she had blended in so perfectly, because she had seemed so completely and utterly at home.

Everything I Never Told You is written with a purity and simplicity that enhances the psychological depth of the characters. James wants to fit into American culture and builds a career around the study of cowboys. His son Nath resents the sense that Lydia is the favorite — she is blonde with blue eyes and looks the least Chinese of the three children — and he becomes obsessed with astronauts and outer space. This page-turning tale is essential reading for any parent who has ever pressured their children — in other words, a cautionary and worthwhile tale for all parents.