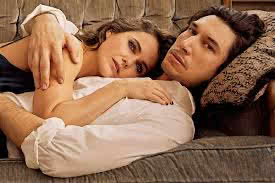 As a therapist, I am perpetually curious about what draws people into love. Relationships are the ingredients that create the recipes of my clients’ lives. And the dynamics of romantic love are an ongoing focus for many people in therapy.

Landford Wilson’s Broadway play, Burn This, starring Keri Russell and Adam Driver is a story about grief, and loss, and falling in love. Keri Russell plays Anna, a chic young dancer in New York City in 1987 who has just lost her gay dance partner and housemate, Robbie, in a freak boating accident. Robbie has not come out to his family. So, when Anna attends the funeral, she is treated as if she was Robbie’s girlfriend and she goes along with this charade.

The play opens as Anna, awash in grief, describes the scenes of the funeral to her other housemate, Larry. (Larry was traveling for work and unable to make it to the service.) Anna stretches her limbs and sighs with sadness as a violent door-knocking interrupts her pensive self-reflection. With swagger and abundant male energy, Robbie’s brother, Pale, barges into Anna’s home.

Pale is drunk, belligerent, and broken up about Robbie’s death. Anna and Pale experience a personality clash that invites the audience to wonder about the intense contrasts that must have existed between machismo Pale and his sensitive, gay, dancing brother. The chemistry is immediate. Anna and Pale banter in annoyance as if they have known each other for years. Anna steps in to say what Robbie could not. Pale teases Anna for living in a less than conventional neighborhood in an off-beat, open space. Anna reprimands Pale for his failure to make time to experience the utter joy of seeing Robbie dance. As far as Anna is concerned, Pale didn’t even know his brother.

And yet, Anna and Pale fall quickly and passionately into each other’s embrace.

Burn This explores how two unexpected, grieving souls might be drawn together despite strong differences in personality, preferences and world views. Anna is artsy and wears lots of flowing robes. Pale is a guy’s guy who drinks too much and throws too many punches. Anna seems drawn to the parts of Pale that may be physically or spiritually similar to Robbie, despite their uncanny differences. Pale seems drawn to Anna’s creative energy and the welcoming way she lives outside of the box. Of course, this is a part of Anna’s personality that bonded so deeply with Robbie with his brother during the years that his family rejected him. Their love seems fused by a dual desire to feel closer to Robbie.

One healing strategy through grief or loss is to aim for a corrective emotional experience. An experience can generate a healing value when revisits a painful situation and tries to do something differently in order to navigate a new result. Pale sees, accepts and embraces Anna for who she is. This mirrors the way he should have embraced and accepted his brother. Anne can absorb Pale’s admiration and acceptance as hers, but possibly not entirely hers alone. Perhaps she views Pale’s love as way to finally allow Robbie some version of being loved and embraced for who he was. This journey offers a glimmer of healing for them both.

When Joan Allen and John Malkovich starred in Burn This more than thirty years ago, Joan Allen won a Tony Award as Anna and John Malkovich won notorious praise for his wacky portrayal of Pale. Keri Russell and Adam Driver recreate these roles as their own and create a compelling, unexpected love story that demonstrates how love can sometimes become a healing and corrective emotional experience.