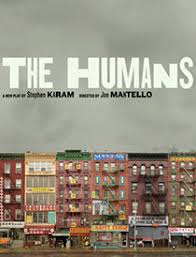 Playing in DC at The Kennedy Center through January 28th!

Each November, many therapy clients begin to plan for and fret over the upcoming holiday season. The holidays in general – and Thanksgiving in particular – represent a psychologically robust time. I sometime joke with clients that there’s a good reason Hollywood creates so many films about Thanksgiving and Christmas.

Stephan Karam’s Tony award-winning play, The Humans, captures the emotional density of Thanksgiving dinner, scripting an intense family conversation with humor, heartbreak, conflict and love. The Blake family descends upon the new home of the youngest daughter, Brigid, and her boyfriend Rich. The affectionate couple are excited about their edgy Chinatown duplex despite frequent electrical outages and an intermittent banging sound from above that shakes the apartment with sudden force. The apartment’s frightening outbursts function as a metaphor for the angst and uncertainty of each character’s life.

Brigid’s parents are not thrilled about Brigid’s decision to move in with Rich without marrying, nor do they approve of her choice to live so close to Ground Zero. Brigid’s father was traumatized by the experience of bringing her older sister, Aimee, to a job interview in the World Trade Center on September 11th and the many hours it took to reconnect following the attacks. Aimee may also be traumatized by that experience; we learn that she suffers from digestive problems that will require major surgery and she’s been fired from her job as an attorney at a Philadelphia firm.

Aimee and Brigid’s parents struggle to care for Momo – the girl’s grandmother who suffers from dementia and is mostly silent and non-responsive but chimes in suddenly to enjoy certain family traditions.

The laugh-out-loud dialogue is realistic and engaging and there are so many moving moments and memorable lines that each audience member is likely to walk away with a unique favorite. Mine took place as the family recalled Momo’s final driving test, when she had an especially hilarious answer to a question she was unable to answer.

The exquisiteness of The Humans is its masterful ability to depict the complexities and beauty of a struggling, everyday American family. The Blakes are flawed and their relationships are tense and fraught. But their capacity for love and devotion despite imperfections make the play endearing and memorable.