The Fault in our Stars

The Fault in our Stars 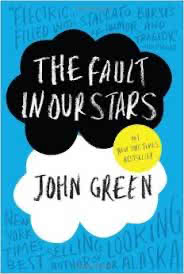 If you have tween or teen daughters, it is highly likely that you have already heard an earful about John Green’s bestselling novel and subsequently recently released film, The Fault in our Stars.  Even if you do not have teens or tweens, you would have to be living under a rock to have missed the hype about Hazel Grace, Augustus Waters, and their inspiring, heartbreaking love story.

Hazel Grace Lancaster, the story’s heroine, is a teenager dying of thyroid cancer which has spread to her lungs.  Her experimental treatment is keeping her tumors at bay, but the doctors predict that the cancer will return.  In order to breathe adequately, she must use oxygen around the clock.  Therefore, she goes everywhere with plastic tubes jammed up each nostril and an aluminum tank on wheels trailing behind her as she walks.  Hazel Grace meets Augustus, an osteosarcoma survivor and amputee, in a teen cancer support group and — despite (or because of?) her condition — he falls for her fast.

In the ultimate romantic gesture, Augustus reaches out to Hazel Grace’s favorite author, Peter Van Houten, and the correspondence that transpires between them is where the romantic adventure begins.  The book’s title is a quotation from Shakespeare’s Julius Caesar that suggests that a person creates his own fate (“The fault, dear Brutus, is not in our stars/ But in ourselves”).  But as Van Houten points out, when dealing with cancer in children, Shakespeare’s assertion is difficult to accept:  “Easy enough to say when you’re a Roman nobleman (or Shakespeare!), but there is no shortage of fault to be found amid our stars.”

This tale’s obvious appeal is the magical and tragic nature of this couples’ circumstances.  Green’s tale is laced with lines that speak powerfully to teens and tweens alike, such as Hazel’s dreamy description of her transition from resisting August’s pursuit to embracing it:

“I fell in love the way you fall asleep: slowly, and then all at once.”

From a psychological perspective, perhaps young readers are equally drawn to the fact that Hazel not only carries the internal pain associated with her terminal diagnosis, but her pain is externally visible — her oxygen tubes and tank are with her always.  August’s cancer scar is similarly visible through his leglessness.  Here are these vulnerable, beautiful teenagers who not only feel different on the inside, but must wear their other-ness for everyone to see.

As a therapist, (and a mom of a teen and a tween), it is my impression that most if not all teenagers carry around the sensation that they are somehow different.  They typically have some aspect of their physical selves that they desperately wish to change.  Their bodies are transforming faster than their emotional maturity.

Green was reportedly adamant that Hazel’s oxygen tank make the transition from the book to the film, in spite of Hollywood’s resistance.  And why wouldn’t Hollywood resist?   Tubes jammed up an actress’s nose during a sex scene is not even remotely sensual according to Hollywood standards.  But perhaps the tubes and all of the awkwardness they generate strike a cord with any young person who feels awkward or different.  Hazel Grace and Augustus’ cancer can help teens come to terms with their growing understanding of mortality, and the scars and otherness represented by the amputation and the oxygen may strike an even more powerful cord.  Perhaps they represent a manifestation of the internal struggle with otherness that is felt by so many teenagers.

Many tweens may not be ready for some of the sexual aspects of this story, but that’s a good reason for parents to read this wonderful book for themselves to decide if it is appropriate for their child.  And if you are the parent of a teenager who is struggling, and, for some reason, they have not already read this book – read it together and talk about it.  Hazel Grace and Augustus’ struggles may offer a perfect opening for meaningful conversations.

Share on FacebookShare on TwitterShare on Linkedin
Posted in Books, Coming of Age, Grief, Love