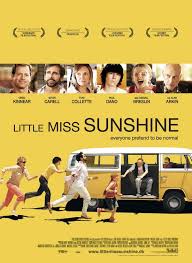 Helping clients navigate difficult breakups is a primary focus of our psychotherapy practice.  Sometimes, a painful breakup triggers a full blown depressive episode that is at once consuming, paralyzing and terrifying.  Such a breakup is depicted in the award-winning 2006 film, Little Miss Sunshine.  Directed by husband and wife team Jonathan Dayton and Valerie Faris, Little Miss Sunshine (their debut film) is primarily about a family road trip from New Mexico to California inspired by the goal of getting their seven year-old daughter, Olive (Abigail Breslin), to the “Little Miss Sunshine” beauty pageant.  Olive’s qualification to compete comes as a surprise to the family, and they scramble to provide her with the opportunity in spite of their over-extended budget and various logistical hurdles.   Olive’s father, Richard (Greg Kinnear) is struggling to establish himself as a motivational speaker and lifestyle guru and is obsessed with positive mindsets and winning.   For Richard, the only worthwhile reason to travel across the country is to help Olive (an unlikely child beauty contestant) become a winner.  The topic of winners and losers — most notably represented through Richard’s repetitive lingo from his unpublished book — functions as the metaphorical backdrop of this hilarious but meaningful story.

Richard is married to Sheryl (Toni Collette).  Sheryl’s gay brother, Frank (Steve Carell) has just been released from a psychiatric facility following a suicide attempt triggered by a painful breakup.  Carell is entirely convincing as a severely depressed, heartbroken academic mourning unrequited love.  His boyfriend has dumped him for someone who, according to Richard’s categorization, is an ultimate winner.  Frank’s replacement is handsome, wealthy, drives an expensive convertible and has a best-selling book and numerous awards under his belt.  Each character in Little Miss Sunshine is struggling with something painful; Frank’s journey through his breakup is tough to watch, but illuminating.

Frank’s suffering may be focused on the pain of rejection, but he clearly has work to do on himself that has nothing to do with unrequited love.  His relationship was unsuitable and inappropriate to begin with, considering that Frank’s  boyfriend was his student.  The painful rejection by his partner gives Frank the unwanted but essential opportunity to become more emotionally mature and more capable of taking care of himself.

When a breakup triggers a depressive episode, this often relates to other parts of a person’s life that are worth examining.  Many times, a relationship — especially an inappropriate one — becomes a way to table other, more pressing, concerns.  In this mode, the breakup forces these repressed concerns back into play.  Through reconnecting with his sister and her family, Frank may not have fun, and he may not emerge as the kind of “winner” his brother-in-law would worship, but he reconnects with his unique strengths and intelligence.

If rejected for another, it is easy to get caught up in comparing one’s self to that other person and attempting to compete with them, either literally or figuratively.  However, the ability to affirm one’s self without an over-emphasis on others is an essential life skill that facilitates a much happier life.  The trajectory of the imperfect, soulful characters in Little Miss Sunshine illuminates this important lesson.

This film mocks and questions society’s emphasis on winners and losers and does not aspire to a happily-ever-after conclusion.  If you are going through an unwanted breakup and find yourself depressed, Little Miss Sunshine is excellent diversion in which art may imitate life and offer insight and inspiration.

Note to viewers:  If you enjoy seeing Steve Carell and Toni Collette in a film together, but sure to check out The Way Way Back!

Share on FacebookShare on TwitterShare on Linkedin
Posted in Breakup, Depression, Family, Films