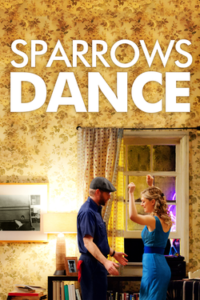 This quiet, intimate love story offers a sensitive look into the rare but real mental illness, agoraphobia.   Filmed entirely in the apartment of an agoraphobic actress, Sparrows Dance paints a portrait of the contained and controlled life this illness demands.

Agoraphobia is a form of panic disorder in which the sufferer feels overwhelming anxiety when entering certain environments that they fear are dangerous or threatening.  In its most severe form, the sufferer feels terrified to leave home.  While the anxiety depicted in this film is extreme due to the nature of the diagnosis, the story and its message are relevant to anyone struggling with anxiety.

The tortured protagonist (Marin Ireland) lives on take out, lives off of residuals from her presumably short-lived acting career, and entertains herself through rides on a stationary exercise bike and dinners in front of her television.  She is so brutally defined by her illness that the film never even reveals her name.
Marin Ireland’s remarkable ability to convey the crippling anxiety her character experiences is palpable and, at times, painful to watch.

When her toilet overflows, she is so desperate to avoid contact that she asks if she can pay the plumbing company to walk her through fixing the toilet over the phone.   The company instead sends Wes, a plumber by day and jazz musician by night.

The romance that unfolds between Wes and the protagonist demonstrates that love alone cannot solve personal battles or demons.  While their relationship is transformative, the power of the story is not Wes’ ability to help cure his beloved.    What this film does best is demonstrate how honest communication can relieve anxiety and bring two people closer together.

In one of the film’s many moving exchanges,  Wes listens to the actress admit to her illness by acknowledging that while she was dressed up for work when he originally came to fix her toilet, she does not have a job.  Wes replies “You don’t have a job?  What do I care?  I’m not your parole officer… I just want to be around you.”  She goes on to describe the full spectrum of her battle with her fear of leaving home and refers to herself as “nutty”.  When she is done, he hugs her and says “You’re not nutty, you’re just having a little trouble leaving your apartment.  I have trouble with full moons…..I’m relieved right now, for a minute there I thought that you didn’t desire to see me.”  These two beautiful characters do not judge each other, they do not analyze one another, and they do not try to fix each other.  They simply enjoy each other’s presence and know how to say how they feel.  By no means does Wes make light of her struggles.  Instead, he gently challenges her to work through them.

In an unusually realistic conclusion, the film’s message is that change may not happen over-night, and the process of overcoming pain is not always straightforward nor easy.  However, for those willing to take even the smallest of steps, change is, indeed, possible.  For anyone struggling with significant social anxiety and or difficulty leaving home, Sparrows Dance is worthwhile viewing and quietly inspiring.