Run Towards the Danger

Run Towards the Danger 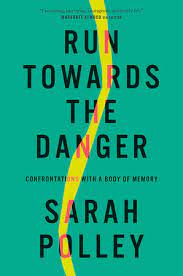 Practically speaking, preparing for foot surgery feels surprisingly like preparing to have a baby. I stopped taking new therapy clients two months prior to my surgery date in an attempt to mold my work/life balance into the most manageable place during the 3 to 6 month recovery period. Not since giving birth two decades ago have I faced a milestone that necessitated such a deliberate pre-meditated effort to scale back. In preparation to give birth, and in preparation for surgery, I prioritized physical fitness and reading. I felt eager to head into each experience with bodily strength and an educated, prepared mind.

Of my pre and post-surgical reading, Sarah Polley’s Run Towards the Danger offered the most meaningful and memorable frame for navigating physical adversity. The book chronicles her fascinating career in film and television but focuses on the long-standing psychological impact of trauma and the challenges of recovering from traumatic a physical injury.

Polley is widely known throughout Canada for her childhood role as Sara Stanley in the wildly popular television series Avonlea (1990-1996). She has starred in several films including Terry Gilliam’s The Adventures of Baron Munchausen and Atom Egoyan’s The Sweet Hereafter. But it is Polley’s work as a screenwriter and director which fully showcases her astonishing talent.

She has written and directed two of the most realistic films about infidelity ever made. Away From Her (2006) won Polley the Canadian Screen Award for Best Director and demonstrates how one can forgive a spousal betrayal but may never forget it. Take This Waltz (2011) stars Michelle Williams, Luke Kirby, Seth Rogan and Sarah Silverman in a study of the human tendency to want what we don’t have. I often suggest one or both films to therapy clients who are navigating the discovery of a spousal betrayal.

Polley’s 2012 The Stories We Tell won the best film of the year award from the Toronto Film Critics Association. The film unpacks a family secret about Polley’s parents’ marriage years after her mother’s death. This unforgettable autobiographical documentary showcases the director’s depth and innate understanding of complex familial bonds and the power of denial. Interestingly, this film and its revelation are not explored in her book.

Clearly, I am a fan of her work. So if Polley writes a book about how trauma shapes the body and her journey through multiple health challenges and a concussion that forced her to drop out of plans to write and direct the film Little Women, I am keen to read it regardless of my foot surgery.

Polley writes earnestly and honestly about the traumatizing underbelly of childhood stardom. Part of Polley’s appeal is that she may be the least vain, least materialistic film star with the smallest ego in entertainment history. She was breaking ground for female filmmakers way before it became a hashtag or a movement. Weinstein tried to seduce her by telling her he could make her an even bigger star, but even as a young girl, she did not want to be a star, she wanted to write and direct. This depth and resolve fuse her account of the myriad of trauma and adversity she faced as a child actor with somewhat absent parents, vicious scoliosis, dramatically lopsided breasts and chronic pain.

At times, it seems Polley may not fully appreciate the breadth of rare door openings her stardom affords her. But maybe that’s because she seems so profoundly disinterested in being a star. The book is full of powerful behind-the-scenes accounts of her experience as a young actor, as a patient hospitalized with a high-risk pregnancy, as an early member of the Me Too movement and a tireless activist. But it is her journey fighting to recover from her three-year concussion that resonates most with my therapeutic training. Polley works with multiple experts and specialists and remains largely incapacitated for several years. As the title suggests, healing comes only when she finds a doctor who insists she run toward rather than away from her pain. Diving into excruciating physical pain runs a parallel track with excavating her traumatic childhood history. The book reads as if it was necessary that she write it in order to fully heal. By running toward her danger, this strong woman comes out even stronger on the other side.