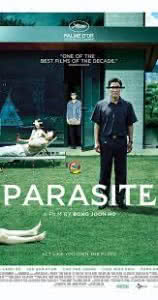 Therapy is about discovering hidden truths lingering beneath the surface. Clients engaged in the therapeutic process excavate complicated or adverse circumstances and ideally discover new insights and perspectives that help them improve their current relationships or choose new ones if necessary.

Many schools of therapy gently (or directly) ask strategic questions to challenge false impressions or misguided imaginings about the motivations, thoughts and feelings of primary personal and professional relationships. This strategy hopefully unearths new insights and healthier perspectives.

Bong Joon Ho’s award winning film, Parasite, rips a giant band-aid off the contrast between superficial appearances and the truths lingering down beneath. The plot focuses on a South Korean family living in such poverty that they exist quite literally beneath the surface: in a damp, cramped basement at the base of a slanted city block where sewage water floods their home routinely. As if that isn’t enough, local drunks routinely urinate facing their small basement window, mixing their urine into the waves of rain racing down the alley and into their home.

Kim Ki-taek is the Buddah-like patriarch, and his family of four generates income by folding boxes for a pizza delivery company.

Kim’s son, Ki-woo, lands an unexpected job (under false pretenses) as the English tutor of a wealthy teenager. The contrast between his employer’s feng shui mansion and his depressing, cramped apartment creates an intense backdrop for an eerie twist of events through which appearances and reality collide. Ki-woo’s jaw drops in awe of the sleekness of his employer’s lives. Then again, “money smoothes out all of the wrinkles.”

In parasitic fashion, Ki-woo convinces his sister, mother and father to follow his lead and worm their way into jobs with the Park family, all under false pretenses. Kim Ki-taek becomes the driver, his wife lands a position as their maid, and his daughter creates a fake diploma and false credentials to become the private art tutor for their hyperactive son. Meanwhile, the Park family has no idea that any of their staff are related.

Ki-woo’s employer, Mr. Park, looks down at Ki-woo and his household staff as forcefully as Ki-woo looks up to him and his family. In an especially awkward scene, Mr. Park complains to Mrs. Park about his chauffeur’s horrible body odor and references the “particular body odor that subway-riders emanate,” inferring that rich people and poor people have different smells. Mr. and Mrs. Park have no idea that the entire Kim family is hiding in plain site and hear Mr. Kim’s cruel insults.

Bong Joon Ho is a master at using film to challenge assumptions and ask probing questions about appearances and reality. This unforgettable film will likely win significant recognition during the Academy Awards. It won the Palme D’or at the Cannes Film Festival. Last week, Parasite won the Golden Globe award for best foreign language film. It was nominated for best director and best screenplay. Bong Joon Ho uses class differences as a backdrop for striking visual prompts and slanted camera angles to examine false assumptions, flawed cognitions and irrational thinking. Nothing is as it seems, and deeper meanings abound.