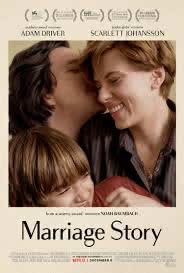 I understand that Marriage Story is a critically acclaimed, Academy Award nominated, movie about divorce. But when a film begins with a series of authentic, heartwarming clips outlining everything that two married characters love about one another, it is difficult for an experienced couples therapist like myself to sit back and watch it all implode.

If only Nicole and Charlie had started this story with a reasonably skilled couples therapist, the film could have traced an arc of productive healing rather than familial disintegration.

Charlie loves that Nicole “makes people feel comfortable about even embarrassing things… She always knows the right thing to do when it comes to difficult family shit… She cuts all our hair… She is a mother who plays – really plays… She knows when to push me, and when to leave me alone…She’s brave… My crazy ideas are her favorite things to execute.”

Nicole loves that “Charlie is undaunted, he never lets other’s opinions or setbacks keep him from what he wants to do…. He’s energy conscious… He doesn’t look in the mirror too often… He cries easily in movies… He loves being a dad and loves all the things you’re supposed to hate like waking up at night…He’s brilliant.” Their compatible lists reflect esteem and intimacy.

The film then cuts to what appears to be couples therapy session. The office has the classic couples therapy configuration (three triangulated chairs, tired looking furniture, small windows) and the therapist-figure talks in classically therapeutic terms, asking who would like to begin by sharing the compiled list of qualities they love about each other. Viewers probably assume he is a therapist, until he mentions that the list under discussion is intended to frame a positive jumping off point for a divorce mediation process.

Nicole refuses to share her list. She is emotionally spent. Her resistance represents the typical withdrawal mode expressed by many spouses in pain. Charlie says he likes his list and wants to share it. He clarifies that he is willing to list for Nicole the many traits he loves about her, regardless of whether she plans to reciprocate. Charlie is making a classic bid for repair. He knows what the viewers have not yet discovered — he has betrayed Nicole on various levels and his list could invite a healing opportunity. An emotionally astute therapist would have invited Charlie to share the list. Unfortunately, the lame mediator (or maybe he’s an unskilled therapist about to refer them to mediation – it is not fully clear) insists that if Nicole won’t agree in advance to share, the exercise is pointless. Let the divorcing begin.

I get it, Noah Baumbach is telling a story about divorce, not reconciliation. Marriage Story won a Golden Globe and is nominated for six Academy Awards including Best Picture. But the film’s widespread praise feels psychologically misguided, because the plot chronicles the breakup of a marriage that is visibly salvageable.

Scarlett Johansson is compelling as Nicole, a former teen starlet who leaves the Hollywood hills behind to follow her husband’s creative direction in his avant garde theater company. Adam Driver is mesmerizing as Charlie, the self-absorbed, self-made genius who oozes creative integrity but has lost sight of his life partner and her need for professional growth and emotional fulfillment. Nicole and Charlie’s journey is framed by an animated supportive cast of performances who collectively demonstrate that divorce devastates families and finances and turns out to be far more stressful to navigate than most of us are socialized to understand.

Therein lies the most frustrating contradiction of this acclaimed film. Marriage Story dives deep into the nuts and bolts of the legal landscape and custody challenges to demonstrate why divorce is so painful. But it never once entertains the possibility of digging just a little bit deeper past all of the banter and bickering to try to work things out. Nicole and Charlie’s chemistry is palpable. They finish each other’s sentences and share fluid, flirtatious banter despite their marital separation. Nicole lovingly ties Charlie’s shoelace in the film’s final scene. But their divorce remains a foregone conclusion.

The problems in this marriage are real, and they are fixable. Nicole needs to reclaim her professional self and find her voice, which she does. And Charlie needs to become more flexible and make room for versions of a script that is co-authored rather than written by him. These are classic, resolvable challenges that surface during couples therapy.

By the film’s conclusion, Nicole is directing serious work and fulfilling her professional dreams. She has a boyfriend whom her mother chases around the house the way she used to affectionately chase Charlie. Charlie has relocated to Los Angeles to be near their son, Henry, and is establishing himself in LA in the very manner that Nicole initially requested. Charlie evolves to become nicer and more present and a better dad. These developments are presented to the viewer as a tale of emotional growth in the face of adversity. The takeaway being that divorce is a nightmare, but it can all work out in the end.

I’ve had the honor of helping many couples like Nicole and Charlie engage in the humbling difficult work of couples therapy. Many couples like Nicole and Charlie are able to reclaim their marriage and repair long-standing wounds. They grow on parallel tracks to those observed in Marriage Story, but they do so while remaining in their marriage and improving their relationships.

The couples I am unable to help are the ones who never shared the loads of chemistry and like-mindedness scripted so believably in Marriage Story’s opening sequence. The couples who discover they must divorce struggle with severe substance abuse, serial infidelity, clashing values and sexual incompatibility.

Furthermore, many clients I work with in individual therapy admit that if they knew how painful it would be to divorce, and how difficult the ongoing challenges, they would have tried harder to sift through the wreckage and work things out in their marriage while they had the chance.
Experts now predict that the divorce rate has dropped from about 50 percent down to 38 percent. However, the divorce rate for second marriages continues to be higher than the divorce rate for first marriages, hovering at about 67 percent. Divorce rarely solves relational patterns. Most of the difficulties faced in one marriage will surface in the next one, either as an exact replica of the prior dilemma or as the flip side of the same psychological coin. For example, if a spouse is unfaithful in her first marriage and does not make the time to work out why she strayed, she is likely to repeat this pattern of infidelity in marriage number two. Alternatively, she might marry someone who will cheat on her so the pattern is the same but the roles are reversed.

When Charlie eventually stumbles upon a piece of paper outlining Nicole’s list of reasons she loves Charlie, I can’t help but wonder if Baumbach is asking himself the same question about the flawed and psychologically incomplete message of this story of a marriage.