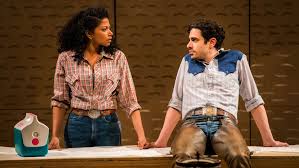 When I decided to see Oklahoma on Broadway, I knew only that this current version differed significantly from the play my mother and I enjoyed on Broadway years ago. I wish I had read Frank Rich’s excellent review BEFORE the show rather than discovering his insightful reflections the next morning as an anecdote to my confusion.

I felt affirmed to discover that Rich, too, felt “perplexed” by the play and motivated to develop a deeper understanding of the experience. His article likens the original play and the phenomenon of its immediate popularity to Hamilton. The original play premiered soon after the attacks on Pearl Harbor and told a tale of human relationships with a backdrop of apparent patriotism. Rich continues:

Like Hamilton, too, Oklahoma! was deemed artistically revolutionary for its time. A self-styled “musical drama” rather than a musical comedy, it dispensed with the usual leggy chorus line and leveraged its songs to advance character and plot. Not that there was much plot: The Oklahoma farm girl Laurey can’t decide between the two suitors vying to take her to a box social, Curly and her farm’s hired hand, Jud.

Through Rich’s review I discovered that the dialogue in the play is unchanged from the original. The play I saw as an adolescent seemed to celebrate courtship, love and romance as well as the American dream. The current play is mesmerizing and overwhelming audiences while telling the same story, only swapping out a knife with a gun it its final scene. The relationships in the current production feel fraught and full of anxiety. The backdrop of patriotism I recall from the earlier production shifts to one that asks pointed questions about the undercurrents of American values and American life.
The idea that the same dialogue can tell two completely different stories is quite interesting from a psychological perspective and one that comes up often in couples therapy. As a systems therapist, I work intensively with clients to focus on communication skills and styles. My work affirms and re-affirms that words matter as do tone, volume and body language. But I have never seen the significance of tone, volume and body language enacted so powerfully as through the comparisons of these two versions of the very same play.

Couples will often remember a conversation – especially a heated one – as if they lived it out as characters in two completely different stories. Especially in volatile relationships, one partner may remember an exchange as hostile and combative and the other may recall the exchange as calm and free of angst. To navigate contrasting versions of the same story, it is essential to excavate how each person feels about the dilemma and what they are willing to own as their part of the problem. It never works to determine with certainty exactly what tone was used at which volume accompanies by what particular body language. Nevertheless, it is fascinating to reflect on a work of art that threads the needle between the two and, in doing so, tells a completely new version of the very same old story.

If possible, make it to Broadway to catch this Tony award winning production. But read (and maybe re-read) Frank Rich’s column before you do.

Share on FacebookShare on TwitterShare on Linkedin
Posted in Cinema Blog, Dating, Trauma