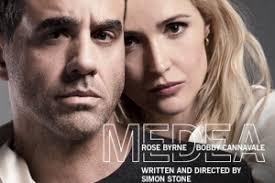 Simon Stone’s jolting modern day version of the classic Euripides tale Medea was so intense, it took weeks for me to gather my thoughts. This steamy pairing of real life couple Rose Byrne and Bobby Cannavale premiered in January at the Brooklyn Academy of Music (BAM) and runs through March 8th. For one thing, it is amusing to watch a duo with so much real life chemistry play the parts of an estranged couple.

In this modern version of this classic Greek tragedy, Medea and Jason are instead named Anna and Lucas. They are ambitious laboratory scientists, and the play begins when Anna is released from a psychiatric facility where she was mandated to receive treatment after trying to poison Lucas when she learned he was having an affair with their boss’s daughter.

Every corner of Stone’s remake is modernized, so technology itself becomes a central character. When audience members enter the spacious, stylish theater, Anna and Lucas’ sons, Edgar and Gus, are kicking back on the stage, quietly enjoying games on their iPads. Edgar spends a significant portion of the play filming his family members for a school project, and his work is often projected on a large screen above the stage for dramatic effect. Technology is used to hurt various characters throughout the play, reminding the audience of the extent to which technology has edited the landscape of romance and relationships. There may be new and modern ways to discover and experience betrayal. But the emotional complexities of the impact of betrayal have not changed.

Anna’s psychological disintegration frames the shape of the play and the trajectory of the family’s unraveling. Stone’s Anna seems like a much less sympathetic character than other versions of Medea’s from the past. What resonates most with each version of this haunting tale is that affairs are complicated. With many affairs, it can seem like it all works out in the end. Most do not unfold like this tragedy, but trauma is a frequent hallmark in its aftermath. And the repercussions of affairs often have lasting consequences reaching far beyond their conscious intent.

The unintended consequences of infidelity fuse the content that I work with each day as a therapist, and it was jolting to experience a dramatic depiction of the worst-case scenario.