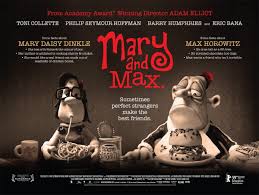 What happens when two misfits find each other?  Why is intimacy sometimes trigger for anxiety and self-doubt?  What does it mean to have a true friend?

Mary and Max, a 2009 film by writer/ director Adam Elliot, delves into the friendship that builds through the unexpected correspondence between kindred spirits turned pen pals.   Set in 1976, the plot follows the trajectory of Mary (Toni Collette), a nerdy, neglected eight year old girl living in Melbourne, Australia.  While visiting the post office with her alcoholic mother, Mary makes an impulsive decision — in a fit of desperate isolation — to open an American phone book, place her finger on a random name and address, and write a letter to Max in hopes of finding a pen pal and maybe even a friend.  Max (Philip Seymour Hoffman) turns out to be a Jewish, atheist recluse with Aspergers Syndrome living in New York City.  Mary and Max share a curiosity about language, a passion for chocolate, and an enthusiasm for an obscure animated television show, “The Noblets”.

Mary is plagued by a large birthmark in the middle of her forehead, a mother who chain smokes while sipping sherry, and a father who plays with dead birds.  Max is overweight, isolated and initially unaware that his exceptional difficulty identifying emotions or relating to others is due to Asperger’s Syndrome.

The humorous but dark animated claymation motion picture begins with the proclamation that it is based on a true story.  Adam Elliot explained in an interview with The Wrap that, for more than twenty years, he has corresponded with a pen pal in New York who is a Jewish atheist with Asperger’s.  He also acknowledged that he identifies with Mary’s character.

Mary and Max (available to stream through Amazon) invites viewers into a psychologically rich tale about the interplay between intimacy, friendship, isolation and anxiety.  The friendship gives both Mary and Max a newfound sense of purpose and connection.  At the same time, their attempts to build the friendship — and maybe even meet in person —  generate tremendous anxiety.  Mary and Max are never romantic or sexual in their correspondence.  They are friends, nothing more.  And yet, the friendship generates a tremendous sense of well-being for each character in their otherwise isolated lives.  Mary and Max evolve and mature, then suffer setbacks, then evolve further as their friendship serves as a steady stream of both inspiration and longing.  To point out that these characters and their difficult eccentricities are extreme is an understatement.  Nevertheless, their conscious and unconscious conflicts about intimacy make for a moving and memorable tale that — while not necessarily relatable — deftly describes the relatable reality that intimacy often requires more work than expected.  The film celebrates its protagonists and demonstrates that even the most isolated outcasts among us are capable of intense love and meaningful connections.

Share on FacebookShare on TwitterShare on Linkedin
Posted in Films, Intimacy & Commitment, Love