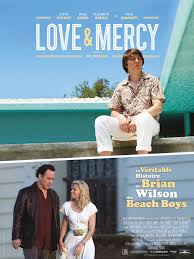 This unsettling but inspiring film profiles composer and performer Brian Wilson’s life, from his early years in the 1960s forming the Beach Boys through his mid-life years in the 1980s living in the aftermath of an apparent paranoid psychosis.   Love and Mercy begins as the mid-life Wilson (John Cusack) breezes into a Cadillac dealership, where, he encounters and is eager to impress a beautiful saleslady named Melina (Elizabeth Banks).   He impulsively purchases a car of her choosing.  Melina does not recognize Wilson’s celebrity status (the Beach Boys were slightly before her time) but she becomes intrigued by his intensity and quirky charm.  Director Bill Pohlad celebrates this unexpected love story.

The film soon flashes back to a young Wilson (Paul Dano) driven by artistic integrity and angst.  The tortured twenty-something Wilson possesses more musical talent than one body could possibly contain.  Beach Boys fans will relish the backstory detailing Wilson’s musical genius, the tension between his brothers and bandmates, the impact of  Wilson’s withholding and critical father, and the dual love stories that bookend the film.

As the film moves gracefully between the past and the present, viewers enter the magical and mysterious world of musical composition as it intersects with anxiety, depression an emerging breakdown, as the 1980s Wilson becomes emotionally crippled through  grossly negligent over-medication.

From a psychological perspective, Love and Mercy represents a striking example of the dangers of over-medication, andthe perils of allowing “friends” to oversee psychiatric and or medical treatment.  Paul Giamatti convincingly portrays Dr. Eugene Landy, Wilson’s sadistic sidekick and personal psychiatrist who belittles, demeans and over-medicates Wilson into a debilitated, paranoid and, occasionally, disassociated state.

Therapy clients often struggle with the decision to take psychiatric medication.   Feelings of shame, frustration, discomfort or embarrassment are common challenges that coincide with the difficult but often necessary choice to treat depression, anxiety and other psychological disorders with prescribed medication.  For anyone who has ever questioned the necessity that psychiatric medication be dispensed by a professional practicing psychiatrist in a conventional medical setting following best practices guidelines, Love and Mercy is necessary and educational viewing.  The heartwarming love story that unfolds and the captivating compositions that decorate the film couch this psychiatric information in a convincing and entertaining cinematic context.

Share on FacebookShare on TwitterShare on Linkedin
Posted in Depression, Films, Love