Ricki and the Flash

Ricki and the Flash 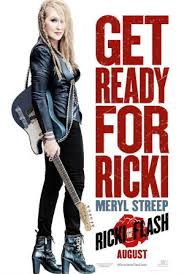 “Marriages come and go, but divorce is forever.” Nora Ephron

This provocative quotation would be a suitable tagline for Jonathan Demme’s 2015 film Ricki and the Flash, released for on demand viewing this week.  This unexpectedly moving tale explores the long-term impact of divorce and maternal estrangement.  When a crisis in their adult child’s life necessitates the involvement of both long-divorced parents, it demonstrates that the reality that if two people bring children into the world, they will share a life-long relationship, divorce not withstanding.

When Julie, the daughter of the divorced couple, learns that her husband is leaving her for another woman just months into their marriage, she overdoses on sleeping pills.  Though she survives, she returns to her father’s home and refuses to get out of bed.   Julie’s father, Pete (Kevin Kline), would typically rely on his second wife, Maureen, (Audra McDonald) in a crisis.  After all, Maureen had loved and embraced Julie and her two siblings.  This maternal role was certainly hers for the taking, since their mother, Linda (Meryl Streep) — Pete’s first wife — abandoned the family when the children were little.  Linda followed her free spirit, formed a band called Ricki and the Flash, and basically married her music.   Unfortunately, Maureen is out of town caring for her ailing father when Julie’s crisis hits.  In desperation, Pete telephones his estranged ex-wife (who now insists upon her stage name Ricki) and asks her to leave her nightly gig in a dive bar and come help him try to support their daughter through her crisis.

Much of the dialogue sounds forced, yet the stellar acting performances and compelling direction override the script to paint a memorable impression of the legacy of divorce.  Perhaps the most important scene takes place when Maureen returns from her father’s bedside and enters her guest room where Linda has just showered.  Maureen asks a wet and towel wrapped Linda to leave:

“I just think maybe it’s not great for you to be here now…I think what [Julie] needs is normalcy.”

“Well I got her out of those pajamas, and I got her hair done, and I think she’s doing a lot better since I arrived.”

“Linda, come on, please, don’t be offended.  I’m just looking out for my kid.”

“She’s your kid too, of course, but Linda, let’s be real.  You haven’t lived with her since she was a little girl.  I was there for the teen years and college.”

“She went to college in MILWAUKEE!”

“Yeah, and who do you think drove her ass there?  Who do you think put together her dorm furniture or paid her bail when she got that DUI or went to the mother-daugher tea at that god-awful white sorority?  Who do you think has been doing all the mom stuff all these years? Look Linda, I respect you as the woman who gave her life.  But after you went to LA all those Christmas visits didn’t cut it.  There was a hole in this family and I filled it.”

“No, I tried to come out to see them more but you always made it so difficult…You alienated my children from me Maureen.  You poisoned the relationship…”

“…You know all those birthday gifts and mother’s day gifts you got from the kids?  I paid for those.  I sent them.  I’m the one who made sure they didn’t forget about you though they had good reason to.  You should be kissing MY feet right now.”

It is gratifying to see a film address this familiar dynamic with unexpected gender roles.  Of course seeing Meryl Streep play an absentee mom who is also a rock star demonstrates what film viewers already know — her versatility is limitless.

Linda heads back to Los Angeles where she takes to the stage with her aging, tattooed bandmates, and her on again, off again flirtation with her bandmate (played by Rick Springfield!) takes an interesting turn.  The film is only enhanced by the music and the likelihood that the band’s name is mocking Rick Springfield’s real-life fleeting stardom.

Several scenes and plot developments feel predictable.  Nevertheless, the characters and their struggles with the lasting impact of divorce and the loaded emotional landscape of its aftermath make this film worthwhile viewing for anyone contemplating or experiencing a divorce.