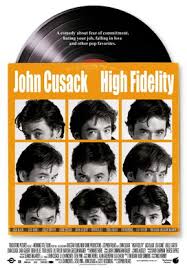 Review by Nick Bastion in a collaboration with Vixen Daily

In continuing my musings on my favorite romantic movies, I thought I’d move onto another off-beat choice – High Fidelity.

Adapted from Nick Hornby’s acclaimed novel published twenty years ago last month, this 2000 film stars John Cusack as Rob, an ambition-less record store owner dealing with a bad breakup.   Rob alternates between disavowing any feelings for his ex (Laura, played by Iben Hjejle) and desperately trying to get his ex back, his trajectory makes extensive use of monologues directly to the audience – 4th wall be damned! – as Cusack spills his character’s guts.

At its heart, the movie is the story of a man coming to terms with reality – leaving “magical thinking” behind and moving towards a more pragmatic, sensible mindset. Rob spends much of the movie rehashing old relationships, wondering where they went wrong, whether his exes even were interested, and whether they were “supposed” to be together – betraying that he thinks that things like ‘fate’ control his love life, while he doesn’t.

This mindset is especially toxic when it comes to relationships, because it leads to decisions made based on imagination, rather than reality. If you think you’re ‘fated’ to be with someone, chances are you’re going to ignore everything they do that refutes that – and when you can’t do that anymore, you leave.

The idea that things are ‘supposed’ to happen, that one relationship didn’t work out because another was ‘fated’ to be, that ‘the one’ is out there waiting for you – all of that stands in the way of finding someone to truly love (or at least in the way of thinking about love clearly).  Rob idealizes every woman he’s been with – only he does it AFTER the relationship is over. While he’s in the relationship, the daily reminders that she’s not the fantasy woman in his head annoy him so much that he pushes her away, is never able to commit, and ruins the relationship.

This is the ‘fantasy thinking’ at work – he has a real, human partner in front of him… but he’s not really dating her. He’s dating his idea of what she should be – his fantasy of the ‘perfect girlfriend’.
And when she inevitably reminds him that she’s not just a fantasy figment of his imagination, but a real person with thoughts, dreams, desires, and needs of her own, he can’t handle it.  Most of the movie is spent recapping his old breakups, and to his credit, as the movie progresses Rob slowly realizes the flaw in his thinking about love.  In a conversation with Laura (after they get back together), he spells it out clearly. “The other women… they’re just fantasies. They always seem really great because there’s never any problems. …I’m tired of the fantasy because it doesn’t really exist.”  Rob (belatedly) realizes that the fantastic highs of the beginnings of relationships never quite deliver, and eventually come crashing down when reality sets in and the fantasy dissolves. He also discovers that it’s more important to be with someone who you never get tired of, rather than chase a fantasy that doesn’t really exist.

The great thing about High Fidelity is that it takes you all the way through Rob’s breakup and subsequent maturation from his perspective. You get denial that Laura meant anything to him, anger that things ended badly, bargaining that maybe if he revisits all his past relationships he’ll get what he wants, depression when he realizes that he’s just making the same mistakes over and over again, and finally, acceptance that he needs to change his mindset in order to be happy.  And that’s what he does! You get to take the whole journey with the character and realize along with him that no, the fantasy just “doesn’t deliver”. Much better to live in reality, recognizing (and celebrating!) your partner as a real person. That’s how to create lasting, loving relationships.

Vixendaily.com is the only site out there that specializes in mind-reading quizzes, content and advice tailored to your particular needs.  It’s like having your own personal mentor guiding you through life’s challenges every step of the way!  It was founded by dating and relationship expert, Nick Bastion, who is the main contributor to the Love & Relationship Advice section of the site.

Share on FacebookShare on TwitterShare on Linkedin
Posted in Dating, Films, Intimacy & Commitment