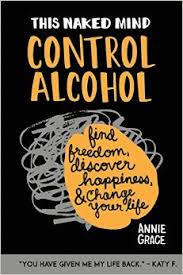 Annie Grace opens her 2015 self-help book about alcohol use by asking a provocative question:

“What if, by reversing years of unconscious conditioning, you could return to the perspective of a non-drinker?”

Grace proceeds to talk readers through her strategy to return to a mental state where the desire for a drink disappears.  She blends snippets from her personal struggle with alcohol abuse with a barrage of statistics, facts and perspectives about the dangers of drinking.  Her bold opinions challenge societal norms and accepted beliefs about alcohol.  For starters, she takes issue with the view that some people have an addiction to alcohol and need to quit, while others are not addicted and may therefore proceed without reflection:

“It seems strange to use the term ‘alcoholic.’  We don’t have cigarette-o-holics but rather people who have smoked and therefore become addicted to cigarettes.  Similarly, you don’t hear about cocaine addicts suffering from cocaineism.  If you consider yourself a regular drinker, you probably take issue with this sentiment.  Why?  Because if we agree that no specific, diagnosable physical defect separates alcoholics from the population of “responsible” drinkers, everyone who drinks is susceptible and perhaps on the path to alcohol dependence.  I assert that over time, with the right level of exposure, anyone can develop a physical dependence on alcohol.”

Grace takes the provocative stance that anyone who drinks any amount of alcohol has some degree of dependence and therefore risks eventual addiction.  “Consider the possibility that since we are human, and since alcohol is addictive to humans, once we begin to drink we unconsciously begin the slow slide into addiction.”  Her writing reads as if she is giving each reader a personal pep talk by touting the reader’s ability to change their lives through re-wiring their unconscious, hard-wired urge to drink.

Liminal Thinking is the centerpiece of Grace’s strategy:

“Liminal Thinking defines how, through the conscious exploration and acceptance of new truths, you can influence your unconscious mind.  This gives you back your ability to make rational and logical decisions about alcohol, no longer influenced by illogical, emotional, or irrational desires.  It will give you control and freedom by changing your understanding of and therefore your relationship with alcohol.  While tradition, advertising and societal norms condition our unconscious to believe that alcohol is beneficial, Liminal Thinking and the material in this book with expose that unconscious conditioning and recondition your unconscious, exposing alcohol and giving you freedom.”

In other words, This Naked Mind functions as a barrage of fascinating, engaging albeit unsettling information about alcohol aimed at jolting the reader into a new space of consciousness.  Her idea is that the very process of making one’s self read the book is a form of negative conditioning that can generate rewiring of unconscious associations that shape the desire to drink and thus pave the road to addiction.  Is she arguing for a dry society?  Maybe.  Does she make a strong case?  Many readers believe she does.

While she offers some space for modest alcohol use, the wiggle room is negligible:

“Even if you drink moderately, it is vital to be aware that your drinking is most likely increasing, not decreasing, over time.  There are some exceptions.  Let’s take my friend Todd.  He approaches alcohol with extreme caution, and for this reason he allows himself a single beer on Friday and a single beer on Saturday.  He never drinks more than one, and he doesn’t drink on other occasions.  He is strict with these rules, and it is his way of ensuring addiction does not take over.  He will probably, as long as he maintains his level of staunch self-control, go his entire life without developing a physical dependence.  That being said, Todd’s body is building a tolerance to even those single beers, and the actual effect he believes them to have is probably nonexistent.  While it’s great to have this level of self-control, the majority of us are not like Todd.”

The book was brought to my attention by a therapy client whose relationship with alcohol was transformed by Grace’s words.  Having read the book and suggested it to others, several clients describe This Naked Mind as a powerful, memorable read.  Grace does not celebrate Alcoholics Anonymous, treatment programs, therapy, or medication.  However, she also does not advise against any of these methods.  In fact, reading her book may lead readers down any or all of these paths.

There are so many schools of psychology and varied modes of therapy; different ones work for different people.  Treating substance abuse is a specialized field where, likewise, not every approach will work for everyone.  As a clinician who does not focus on treating substance abuse, I always ask about levels of alcohol use and other substances in the beginning of therapy to determine if a client should be referred elsewhere.  But many people drink more than they may realize, and if someone says they have five drinks each week, they probably have ten.  Where then should we draw the line?  This, too, becomes a personal and individual question and I am finding it immensely beneficial to have Grace’s provocative book in my pocket to help my clients challenge themselves and find the answer that works for them.

Share on FacebookShare on TwitterShare on Linkedin
Posted in Books, Substance Use