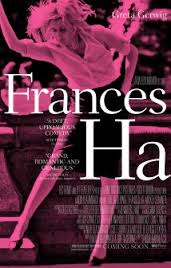 With so many engaging, independent women living the single life in New York and in cities everywhere, it’s surprising there aren’t more authentic films about the single woman’s experience.  Sure, Sex and the City was a great fit for my cohort, and now Girls continues to break new ground, but quality thoughtful films about what it looks and feels like to be a single woman in the city are hard to find.  (I should know: as a psychotherapist who believes that prescriptive film viewing enhances the effectiveness of psychotherapy, I am always on the lookout!)

Francis Ha is a superb exception.  Played by the film’s co-writer, Greta Gerwig, Frances is a quintessential hipster and tireless free spirit.  She bops around from apartment to apartment, apprentices in a modern dance company whose choreographer is trying to convince her to hang up her dancing shoes, and cares deeply about her best friend, Sophie, who functions as her mainstream alter-ego.  What’s most striking about this film is its ability to convey the pain experienced by its central character even though Frances refuses to flinch in the face of multiple rejections.  Frances takes each disappointment with a smile, even when she’s alone.  Sure, she longs for love.  Her devotion, enthusiasm and love for Sophie blurs the platonic with the romantic.  But she keeps her chin up even as everyone around her couples up.

Frances’ inner compass is solid and she is waiting for someone special.  She dreamily describes her vision of love and connection:

“It’s that thing when you’re with someone, and you love them and they know it, and they love you and you know it…but it’s a party…and you’re both talking to other people, and you’re laughing and shining…and you look across the room and catch each other’s eyes…but…it’s not because you’re possessive, or it’s precisely sexual…but because…that is your person in this life. “

Since enjoying Francis Ha a few weeks ago through Netflix, I have started suggesting the film to my therapy clients.  For those who feel inspired by her quirky outside-the-box approach to life, I then suggest Mistress America.  Like Francis Ha, Mistress America is directed by Baumbach, written by Baumbach and Gerwig, and co-stars Gerwig as a character who might just be Frances Ha in five more years.  If you’re single in the city and looking for an inspiring character who demonstrates that the journey is just as important as the goal, Francis Ha is well worth a look.

Share on FacebookShare on TwitterShare on Linkedin
Posted in Coming of Age, Dating, Films, Work & Career