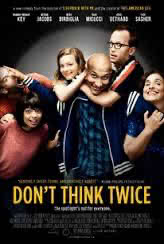 Most people initiate therapy because something has changed.  A relationship may have ended, a new relationship may be intensifying.  And workplace adjustments also can spark a desire for therapy.  Maybe a team is restructuring or a new boss is shaking things up.  Even if the change is a net positive, adjusting to a new dynamic often generates symptoms.  Since I practice in the work-obsessed town of Washington DC, work related transformations are a frequent source of anxiety, energy and self-reflection.

Don’t Think Twice, Mike Birbiglia’s cinematic tribute to the glorious and under-appreciated art form of theatrical improvisation, captures this common psychological phenomenon of resistance to change.  Jack (Keegan-Michael Key) is a member of the Brooklyn based improv team “The Commune”.  He and his creative, witty compatriots play to a small nightly crowd and are so committed to their craft that they take odd jobs, live in substandard arrangements and do whatever it takes to perpetuate the Commune’s artistic integrity.  The group’s collaborative professional integrity is well stated when Jack’s colleague and girlfriend Samantha tells the group that the day she joined the troupe was the most meaningful day of her life.

Suddenly, the group’s balance and harmony is disrupted by Jack’s success.  Producers from “Weekend Live” (think Saturday Night Live) show up in the audience, pluck Jack from the troupe, and skyrocket him to fame and fortune.  The Commune’s leader, Miles (played by Birbiglia) then revisits his failed audition for “Weekend Live” much earlier in his career.  Miles is the veteran of the group who starts feeling all washed up at thirty-six.  All of the Commune’s members demonstrate a degree of resistance and reservation to Jack’s newfound celebrity status.

The psychological school of “systems theory” emphasizes that our lives are made up of various systems — most notably family, friendships, school, romantic life and work.  What these systems all share is a desire for homeostasis.  Each system consciously and unconsciously resists change, including change for the better.  Shifts in the system are met with resistance and symptoms (most notably anxiety) arise among its members.  Don’t Think Twice models a template for systemic change that mirrors the principles of systems theory.  Change may be difficult and unsettling, but the difficult feelings and symptoms that arise in the face of change are usually opportunities for tremendous growth.

This wonderful little film houses a  gigantic soul and celebrates professional integrity.  Troupe members wrestle with the challenging but rewarding choice to pursue professional passions despite the absence of financial or external validation.  If you  are facing a professional fork in the road, or any other moments of significant change, consider watching this provocative and inspiring film.