Diary of a Mad Housewife

Diary of a Mad Housewife 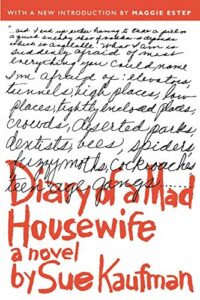 The book jacket for Diary of a Mad Housewife describes the novel as “a classic of urban women’s fiction that gave a wry voice to the nascent feminist stirrings of the 1960s.” I’m not sure how I missed it on my mother’s bookshelf while growing up in the 70s, but she confirms that it was right there all along with prominent placement. This engrossing page-turner eventually became a popular Academy Award nominated film, and is full of extremes. Both hilarious and heartbreaking, Sue Kaufman’s best-selling novel paints a portrait of city life in the 1960s that demonstrates how much has changed and how much has stayed the same.

Despite how often characters telephone local shops and charge groceries to their monthly tabs, and a 200 dollar business suit described as an obscene expense, the novel reads as remarkably current. Kaufman’s take on the challenges of motherhood, identity, marriage, and sexual intimacy withstands the test of time.

We meet the novel’s protagonist, Betina (or “Teen” as her husband Jonathan calls her), when she decides to keep a diary as a fitful attempt to cope with the escalating pressures and chaos of her life as a Manhattan housewife. Betina hopes that journaling will help her make sense of her aggressive social life and growing discomfort with the family’s superficial trajectory. She knows she needs help and she finds reading as therapeutic (and comic) as journaling. D.H. Lawrence is among her comforts, as she enjoys the satirical timing while reading as her husband readies himself for bed:

“What is more, she felt she had always really disliked him. Not hate: there was no passion in it. But a profound physical dislike. Almost it seemed to her, she married him because she disliked him, in a secret, physical sort of way. But of course, she had married him really because in a mental way he attracted her and excited her. He had seemed, in some way, her master, beyond her.” I read it three times, and was going over it a forth when Jonathan came out of the bathroom and got into bed. I sat gripping the book, waiting: it was exactly the sort of ironic moment for him to propose a Roll in the Hay. It never failed.

Betina’s diary guides readers through excessive substance use, an extramarital affair, way too many taxi rides, and a slew of raucous cocktail parties that might make certain middle-aged readers feel a little bit boring! At its most depressing, the diary is testament to how easily financial success can lead families down a superficial and dismal path. But the novel’s conclusion feels modestly hopeful and alludes to the possibility that therapy can be worthwhile, even with a substandard therapist. Reading and journaling are, indeed, therapuetic, and authentic change is possible. This cheeky novel captivated readers when published in 1967, and can be healthy bibliotherapy for mothers navigating multiple relationship challenges.