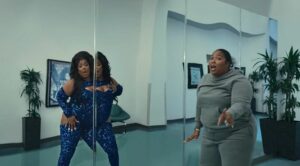 “It’s Bad Bitch O’Clock, yeah, it’s thick-thirty…” may have been the most mindful declaration of 2022. It is a statement of intention in the here and now. It is a statement of power. It tells you what time it is. So often mindfulness practice leans towards serenity and calm. But Lizzo’s smash hit, About Damn Time, reminds us being present can also mean being present and partying. The need celebrate and to feel like you have a “win” is a totally valid, important, and sometimes overlooked need when we are healing.  In addition to feeling safe and loved, we also need to embrace or reembrace our vitality and power.  Lizzo’s music is this. Celebration is an essential part of her musical style and brand. It’s hard not to smile when Lizzo is performing.

This song was met with hearty enthusiasm and connection when it was released in the spring of 2022.  Her lyrics have multiple meanings including updates on themes from her own previous songs, as well as references to other pop hits. She is also capturing a moment in history in lyrics like, “is everybody back up in the buildin’?” She sings this song just as many of us are asking our friends and coworkers that same thing. We are figuring out how to return to spaces we’ve stayed away from for over 2 years. “It’s been minute, tell me how you’re feelin’.”  She references isolation in 2020, and her video depicts the imagery many of us have seen our own versions of: work spaces left behind like ghost offices. She sings about changes that have happened intensely since 2020 and celebrates, “Bitch, I might be better!” The optimism is so catchy!

In her interview with audacy.com she states her intentions with this song, saying, “I think life had thrown some major traumas and hard experiences at us, especially globally these last few years. And I wanted to write a song that allowed us to take a moment and celebrate our survival, and celebrate how far we’ve come.” And then, after my own heart, she said, “music is my therapy.” I love that she writes songs specifically to make herself feel good.

Lizzo also mobilized this song as a positive cultural message.  During her performance at the 22nd BET awards in June of this year she gleefully shouts, “It’s about damn time we stand in our power, black people, my people!”  This is an especially powerful statement in the middle of such a beautiful revival of disco style music that was originated largely by BIPOC musicians.  Much of the demise of disco in the late 70s, early 80s was due to the racism, sexism, and homophobia of the time that was intolerant of music that centered BIPOC musicians, empowered women, and the LGBTQ+ community. The resurgence of disco-influenced music at this time is a triumph.

So, all of this is to say it’s about damn time I posted a blog, and wrote about this song. I wondered if I had missed the moment by not posting soon after it’s release. As it warmed up from spring to summer of this year, it seemed like there was this brief moment where COVID cases were down, little kids were finally able to get vaccinated, and people were experimenting with uttering the words “post-pandemic.” It really felt like it was about damn time. But then in the fall we learned a new word: “tridemic,” or “trippledemic,” depending on your news source. “I’m way too fine to be this stressed,” became something parents growled while dragging kids to urgent care or the ER yet again. It’s been… a lot.

Thankfully, “Bad Bitch O’Clock,” is both timely AND timeless. For those of us who felt this song when it came out and are still feeling it, keep dancing. For those of us who need to retreat to the sweats for some more time, the sequins will be there for whenever we are ready to put them on again.