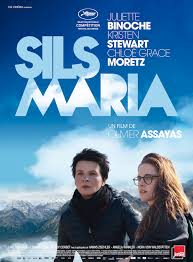 When therapists assign films to clients, research demonstrates that this approach can improve and enhance the effectiveness of therapy.  Why?  Movies — when thoughtfully selected and strategically assigned — function as powerful therapy tools because film provides a non-threatening mirror reflecting aspects of the client’s experience.  The distance between the screen and the client allows the viewer to selectively pick and choose which parts of themselves they feel ready to see and address.

The Clouds of Sils Maria is an excellent example of the kind of film that could compliment therapy.  The plot provides a quintessential example of the multiple ways that art corresponds with life.  Mirrors are everywhere in this unsettlingly honest film.  Juliette Binoche plays Maria Enters, a famous actress struggling with the aging process.  The early scenes of the film show a gracefully aging but unhappy starlet who no longer receives the adoration to which she is long accustomed.  Maria resents the way the world revolves around social media and self-promotion.  (Though she never tires when talking about her own tales of fame and the fast lane of her earlier years.)  She is struggling to agree and adjust to the terms of her divorce.  Her personal assistant and agent are pushing her to make a daunting professional decision that reflects just how much time has passed and the extent to which Maria has aged.

Twenty years earlier, a legendary playwright had given Maria the role of a lifetime.  She brilliantly played the part of Sigrid — a provocative, self-centered ingenue who seduces her forty-something female boss, Helena, and ultimately drives her to suicide.  Now, a coveted director is offering Maria the role of Helena in a remake of the original tale — an ideal (and ironic) promotional vehicle for this new film-within-a-film.  The production is packaged as a tribute to Maria’s dear friend — the recently deceased playwright who made her famous.  Maria resists the opportunity, explaining that the woman who played Helena in the original production died soon after in what appeared to be a suicide.  If art reflected life for Helena’s first actor, Maria expresses that it may be to risky for her as well.

Valentine (Kristen Stewart), Maria’s symbolically-named personal assistant, uses her own seductive powers to convince Maria to take the part.  Valentine and Maria go on location and play house in the Sils Maria mountainside as they prepare for Maria’s new role.  While hiking the scenic Swiss mountainside practicing lines for the play, the unspoken but obvious sexual tension between Valentine and Maria offers a perfect mirror reflecting the tensions of the play.  And so another film-within-the-film unfolds.  Meanwhile, Maria struggles through the torment of playing second fiddle to the mega-star and internet sensation Jo-Ann Ellis (Chloe Grace Moretz) who is cast to star as Sigrid in the remake.  Jo-Ann represents a disturbing reflection of Maria’s self-centered past, and art continues to reflect life on multiple levels.

When Maria looks forward to meeting with her new director to finally receive some substantive attention and ends up instead in the middle of a paparazzi fueled viral internet scandal, this film is at its finest.  Anyone who has ever sat across the table from a preoccupied person tapping away at their phone will remember Binoche’s honest and believable performance.  Clouds of Sils Maria is a cinematic house of mirrors reflecting complex dimensions of sexuality, sensuality, aging, intimacy, and what it means to embrace and pursue professional excellence regardless of recognition and promotion.  While this film is difficult to watch, it demonstrates the multiple layers through which art can beautifully reflect life while life simultaneously feeds and reflects the artist’s pursuit of excellence.