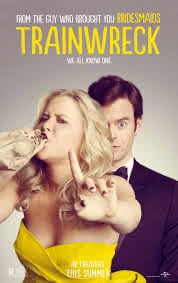 As a therapist specializing in relationships, I spend a lot of time discussing dating patterns, intimacy and commitment.  Many clients decide to enter therapy when they realize that their romantic life has felt unsatisfying for years.  When a client expresses pain or frustration about difficulty finding love, it is often helpful to focus on the choices they make in terms of whom they date and how they go about it.  It can also be helpful to consider that fear of commitment is not always so straightforward to identify.  It might manifest itself as a conscious decision to hesitate to take a healthy relationship to the next level.  But it often involves a pattern — which is not always conscious — of choosing unavailable, unkind or otherwise unsuitable partners.  And if a client expresses genuine desire to change their approach to relationships, sometimes watching a film on the topic can function as a catalyst toward genuine and authentic change.

Trainwreck, written by comedian Amy Schumer and directed by Judd Apetow, is the most potent film about fear of commitment to come along in years.  It is also among the most hilarious films about commitment in recent memory.  Released only a couple of weeks ago, several therapy clients have already mentioned that this film has spoken to them on a visceral level:

“How refreshing that the person who keeps running away is a woman.  It’s so easy to feel like something is wrong with me for being a women and not wanting to get too close.  Popular culture constantly implies that all women want is to get married and all men want is to avoid the ball and chain.  Amy’s character feels entirely believable.”

The semi-autobiographical nature of the story adds to Schumer’s authenticity:  she shares the same first name with her character, and Amy’s father in the film has multiple sclerosis as does Schumer’s real-life father.  Schumer has discussed the real life dimensions of her script, and her comic genius is in full force throughout her performance.  However, her approach to this character conveys several serious dimensions of what it means to struggle with intimacy and commitment.

Sometimes people do terrible, cruel and even unthinkable things to people even when they are madly in love.  When fear of intimacy or commitment is driving the behavior, this does not excuse the hurt or pain that results.  However, it sometimes helps to consider hurtful acts through this lens.

There are several kinds of love.  Sometimes the kind that you don’t notice at first — that builds slowly over time — is the kind of love that will last.  We are socialized to expect instant fireworks when entering into romance.  And for many people (most often for those whose childhoods were generally stable and who were exposed to healthy relationship role models) fireworks do lead to love.  For many others (more often those whose templates for romance lack optimal role models) fireworks spark trouble and play out as relationships that have flash and style but are lacking in substance.

It is no surprise the Schumer’s first film is receiving several rave reviews.  The opens scene with Amy’s father lecturing a nine-year-old Amy and her five-year-old sister and equating their desire to play with more than one doll as a metaphor to explain why “monogamy isn’t realistic”.  The film closes with an equally memorable finale which is too laugh-out-loud excellent to spoil.  Throughout, Schumer mixes humor, insight, compassion and stellar real life heroes (LeBron James, Chris Evert and others play themselves!) in a successful recipe for sheer entertainment and serious cinema-therapy.

Share on FacebookShare on TwitterShare on Linkedin
Posted in Dating, Films, Love, Substance Use