Call Me By Your Name

Call Me By Your Name 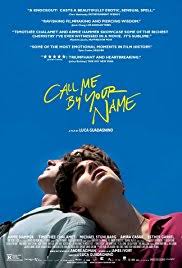 Each summer, Elio’s father (an archaeology professor) hires a research assistant to work and live with the family. When the dashing and entitled Oliver (Armie Hammer) arrives on the scene, his American attitude clashes a bit with Elio’s family who seem charmed by his flamboyant looks but overwhelmed by his cavalier demeanor. Elio (Timothee Chalamet) is seventeen years-old and absolutely stunning. Elio and Oliver’s sexual chemistry sparks quickly but remains subtle and subdued, until it explodes. The Italian countryside in which the tale unfolds infuses an passionate clique of characters with joy and abandon.

The film’s title, Call Me By Your Name, alludes to how same-sex relationships involve special challenges with respect to identity and the emotional task of balancing separateness and togetherness. Romantic partners sharing the same gender can more easily blend into one. Nevertheless, this entrancing love story is ultimately more about individuality and coming of age than it is about separateness or togetherness.

The plot is not concerned with gender so much as it is with the passion and abandon of young, forbidden love. The scenes building up to Elio and Oliver’s affair are as sensual as the sparks that fly once the relationship becomes physical. Each scene is as visual and tactile as the next. But the film’s closing conversation between Elio and his father is especially memorable. As a therapist who works with many therapy clients who are eager to explore relationships with their parents or with their teenage children, the insight and honesty that flows between father and son is extraordinary. Elio’s father speaks to Elio with palpable respect, candor and honesty. His wisdom and perception stuns, as he offers a template for fatherly discourse that is as instructive as it is inspiring.